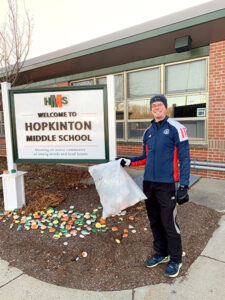 Hopkinton Middle School science teacher Matt O’Connell has a number of fundraising ideas as he prepares to run the Boston Marathon on behalf of the school’s Desire to Inspire Foundation.

He was looking for a creative idea during a run when he looked around and realized it was right in front of him. Seeing garbage along the roads as he ran, O’Connell decided he would turn the trash into cash. His idea: Take requests to pick up garbage and hopefully get donations in return.

“People can just email me and tell me a place in town you want cleaned up,” he said. “I’m running around anyway. I’ll just change my running route and go over there. Then if they want to donate, great.”

O’Connell, who has been running for 30 years but will be competing in his first official marathon this year, said he’s noticed more garbage on the roads lately, and he’s happy to do his part to beautify the area.

“I’ve kind of noticed an increase in what people are chucking around,” he said. “I feel like I’ve seen a lot more. I have a feeling it’s trash fees and things like that. In Hopkinton they don’t have the trash fees, but where I live in Upton they do, and since we’ve had to go to the bags it’s been a bigger problem. When you’re driving a car you really don’t see it, but if you’re walking and running you notice it a lot.”

“I do a couple of days of intervals, so it’s easy to run for a while, then I’m walking anyways,” he said. “My plan would be to run, put bags down, then take the car around and pick up the bags.”

Those interesting in participating can email O’Connell at runforgood343@gmail.com or visit O’Connell’s fundraising page at gofundme.com/f/mu2ytx-boston-marathon-desire-to-inspire.

Comcowich on mend after accident

Best wishes for a speedy recovery to Hopkinton’s Anne Comcowich, who was injured in the Holy Cross rowing team’s devastating motor vehicle accident in Florida on Jan. 15.

Comcowich, a sophomore, was riding in the team van that collided with a pickup truck, causing the death of a rower from Uxbridge, Grace Rett.

Comcowich broke both her hips and a leg and suffered a fracture to her vertebrae as well. She had multiple surgeries in a Florida hospital in the days following the accident.

The Jersey barriers at the corner of Chestnut Street and Hayden Rowe were removed earlier this month, after Verizon completed its rewiring and moved the utility poles off the widened roadway. The full-service traffic lights still won’t be activated until the spring, but the intersection is less congested without the barriers.

“The town with its contractor has put together an interim solution for improving the intersection — and by interim solution I mean between now and when the weather breaks and when we can actually grind out the pavement and resurface it and paint the lines and everything,” explained Hopkinton DPW director John Westerling. “But we were able to remove the Jersey barriers and pave the shoulder so that it’s a smoother, wide-open area. We were able to accomplish that thanks to the efforts of Verizon and our contractor. … Once the weather breaks and the construction season begins — probably in April, right after the Marathon — then the contractor will remobilize.”

The new intersection will feature left-hand turn lanes from Hayden Rowe onto Chestnut and vice versa, which, combined with the new traffic light to replace the blinking yellow/red, should help the flow of traffic substantially.

No ice rink this winter

Parks and Recreation was planning to install an ice rink at the outdoor basketball courts in front of Hopkinton Middle School, as it usually does, but those hopes were blown away — literally.

The base of the rink was put in place in early January, but before the town had a chance to add water, parts of it — primarily the foam used to balance the boards — blew away during a very windy day on Jan. 8.

Parks and Rec decided to take a pass this season rather than spend additional funds to set it up a second time.

Hopkinton’s Military History Essay Contest, featured in this space last issue, has pushed back its deadline for submissions to March 1. Also, the contest is open to all high school students (not just seniors).

The contest is presented by the Association of the United States Army with support from local sponsors Phipps Insurance Agency and UniBank. Winners will receive scholarships worth $1,000 (first place), $500 (second) or $250 (third).