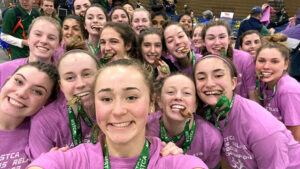 The Hopkinton High School track teams continue to stand out in the Tri-Valley League, again winning TVL Large School Division titles this winter. Both teams clinched with victories over Norwood on Jan. 15.

On Jan. 12, senior Schuyler Gooley ran the 2-mile race in a time of 10 minutes, 55.02 seconds, winning the MSTCA Northeast Regional Invitational and setting a school and TVL record in the process. Junior Olivia Jones was third in the same race. Gooley has qualified for nationals in the 1,000, mile, 2-mile and 5K.

The top-ranked team in Eastern Mass. Division 3, the undefeated Hillers outscored their first 10 opponents by a whopping count of 59-15, including two impressive Tri-Valley League wins: an 8-1 rout of Norwood and a 4-2 win over Holliston.

Hopkinton’s top line, consisting of seniors Sean Walsh, Tommy Hamblet and Kyle Rogers, has been a force. Freshman Pavit Mehra has stood out as well. …

On the girls side, the Hopkinton/Dover-Sherborn co-op team continued to show improvement, putting together a four-game streak in January without a loss (a win and three ties). Goalie Kristin McCluskey made 35 saves in the win, a 2-1 decision over Medway-Ashland.

Boys hoops back in gear

The HHS boys basketball team continued it strong play into late January, closing in on a tournament berth. After dropping their first Tri-Valley League game to Medway on Jan. 17, the Hillers rebounded with a 10-point win over Holliston on Jan. 21 to improve to 8-3 overall and 8-1 in the TVL. Hopkinton continued to rely on a balanced attack, as 10 players scored vs. Holliston. Seniors Tommy Ambrosone, Steven Maffiore, Travis Finfrock and Elan Rosen have led the way.

Coach Tom Keane returned to the bench for the Holliston game after a three-week medical leave but continued to leave interim coach Chris Banks in charge of things.

HHS will host a Coaches vs. Cancer event on Feb. 7 when the boys host Medfield. The team will accept donations to the American Cancer Society at the game, which tips off at 6:30 p.m.

Recently retired HHS golf coach Dick Bliss was named the 2019 National Federation of State High Schools Associations Coach of the Year for girls golf. Bliss will be honored at the Massachusetts Interscholastic Athletic Association Awards Banquet on May 21.

The 70-year-old Bliss announced in November he was stepping down after four decades leading the school’s golf program (which is co-ed), although he indicated he would still do some part-time coaching and individual teaching in the spring. He led the team to four state titles, 10 league titles and an overall record of 273-60-1. Bliss also was a teacher, boys basketball coach, girls basketball coach and athletic director at various times during his accomplished career in town.