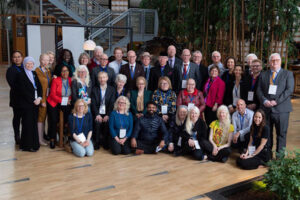 Hopkinton’s Carmen Camacho (front row, fourth from left) traveled to Paris last month to take part in an international meeting for leaders in the albinism community.

Hopkinton resident Carmen Camacho knew she had albinism when she was growing up in Puerto Rico. It was not until she was an adult, however, when she learned she had a more serious form of the condition.

She since has become an advocate for people with Hermansky-Pudlak Syndrome (HPS). Last month, as the New England coordinator for the HPS Network, she traveled to Paris to take part in a conference for leaders in the albinism community and also to spread awareness of HPS.

“It was a great step in human rights for people with albinism around the world,” she said of the meeting, where it was decided to move forward with creation of a Global Alliance of Albinism.

Albinism is a condition in which a person lacks pigment in their skin, hair and eyes, and includes visual impairment. HPS is a rare disorder with more serious symptoms.

“HPS is everything with the albinism — the lack of vision, the lack of pigment — but we are missing the dense bodies in our platelets, so we don’t clot, so we have a bleeding dysfunction,” Camacho explained. “There are 10 subtypes of HPS. HPS-1, 2 and 4 develop pulmonary fibrosis 100 percent of the time.”

Camacho was diagnosed with HPS-1 in 1989, when she was 24 years old. She was working toward her master’s degree at SUNY-Binghamton when she got a call from her mother in Puerto Rico. A relative had died at age 39 from lung disease. Two other relatives eventually were diagnosed with HPS-1 and died young as well.

“My mom called and said, ‘Your cousin passed away,’ and she passed away from this condition that we didn’t even know existed,” Camacho recalled. “She’s like, ‘I think you need to go get tested.’ My professor at the time knew a hematologist at Hershey Medical. So we went and they tested my blood and they found that I had no dense bodies, so they said I had HPS. It was later on that they tested genetically, and the gene test said HPS-1, which I knew I probably would have because my cousin had that.”

Camacho, who works as a clinical therapist, has 20/400 vision in one eye and 20/600 vision in the other. So while she can see — and technology in the form of things like her iPad has helped her live a relatively normal life — she is considered legally blind and cannot get a driver’s license. But that is a less-serious challenge than the one that awaits her.

“I have HPS Type 1, so I am developing the pulmonary fibrosis and at some point I will need [a lung transplant],” she said. “I’m not ready to have a lung transplant yet, but the beauty of diagnosis is you know that you are going to get it so you can work on things ahead of time. So I am getting evaluated at this point for a lung transplant.

A mother of two adult sons — her husband is not a carrier of HPS so her children do not have it, as it is passed down only when both parents are carriers — Camacho is keeping busy promoting awareness and research by attending conferences and gatherings around the country. Locally, the HPS Network works with researchers at Boston University, UMass and Beth Israel Medical Center as well as the National Institutes of Health.

“It’s all with the ultimate goal of a cure where people would not need lung transplants anymore,” Camacho said.

Meanwhile, Camacho will continue to be involved in the Global Alliance of Albinism, which is expected to be formally created next year.

“When we thought about getting involved with the Global Alliance we saw it as a way to expose these other albinism groups, to tell them about Hermansky-Pudlak,” she said. “Because people don’t usually get diagnosed unless there is an issue. They get diagnosed with albinism — like, everybody knows we have albinism — but when they don’t get diagnosed appropriately things can happen. People can bleed to death or they can develop the fibrosis and not know they have it until they need a lung transplant. So for us diagnosis is very important. So we saw this opportunity to be part of the Global Alliance as a way to say, ‘We are here.’ And the Global Alliance is working on the human rights and well being for all people with albinism. So that fit in perfectly with what we wanted to do.

For more information on albinism and HPS, visit albinism.org or hpsnetwork.org.

Hopkinton Boy Scouts will be helping out at a couple of annual events in town that have become local traditions.

On Feb. 28-29, the Hopkinton Public Library will host Mini-Golf in the Library. The scouts will help set up the 18-hole course, which takes players throughout the building, and assist with registration and supervising the activity. There is no admission fee, although donations to Friends of the Hopkinton Public Library will be welcomed. The event, open to families and individuals of all ages, runs on Friday, Feb. 28, from 11 a.m.-5 p.m., and on Saturday, Feb. 29, from 11 a.m.-3 p.m.

Boy Scout Troop 4’s annual Pancake Breakfast is scheduled for Saturday, April 4, at St. John the Evangelist Church. The event, which runs from 7:30-11 a.m., features scouts serving a variety of pancakes (including ones for those with food restrictions) along with other refreshments. There will be a silent auction as well, and proceeds will help fund high-adventure trips for Troop 4 scouts, including hiking in the National Parks, camping and other outdoor opportunities. For more information on the breakfast, email Jennifer Donahue at donahue49@gmail.com.