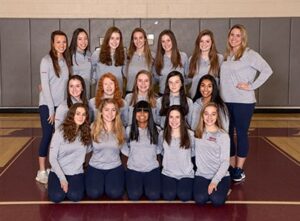 A group of Hopkinton High School athletes, including a trio of freshmen, helped the Westborough gymnastics co-op team this fall, doing well to create their own routines and execute them in competition.

“The girls worked hard in practices to get better and we improved our scores tremendously from our first meet to the last one,” coach Becca Leary said. “We were happy with the results.”

Each of the Hopkinton members of the co-op had the chance to compete in meets at some point over the course of the season. For the three freshmen, it was the first opportunity they had to compete with a high school team and they all had to come up with their own routines and become proficient in them so they were able to help the team in meets.

Hopkinton junior Alisa Stolyar was the most experienced of the Hillers on the roster. She suffered an injury that ended her season early, but she stayed with the program as a team manager.

“She has been a good role model for a young team with a lot of freshmen,” Leary said. “Despite being injured for part of the season, she came to practice and made sure she was doing what she was able to do.”

Stolyar was able to compete in the floor exercise several times before her season ended.

“Despite any injuries, she was still there and part of the team,” Leary said.

Freshman Caitlin Sansonetti was one of the squad’s harder workers. She created a floor routine working with several other girls on the team and was able to compete in meets several times. Maya Ghosh, another freshman, had success in the balance beam event.

“She came in having not done gymnastics in while and she was able to get a beam routine put together and had some scores that counted towards our team score,” Leary said.

Eleanor Benge is another freshman who entered the program unsure of what she would be able to contribute but ended being able to compete after finding her music and a suitable routine. Leary praised all of the Hopkinton athletes for their ability to be creative and come up with routines.

“Floor routines are difficult because they go to music, there is a dance component, they need to have a tumbling component and some leaps and jumps,” Leary said. “There are a lot of requirements they have to meet, but it has all got to go to music and can’t be more than 90 seconds long. So getting a routine that flows and meets all of the requirements at the same time is a challenge.”

The balance beam is similar in that it requires a large number of components and the athletes need to gain enough confidence in their moves to pull it off on competition.

Westborough, which finished fourth in the Midland-Wachusett League Meet on Feb. 15, graduates only three seniors out of 17 athletes on this year’s team. Seven members of the roster this winter are freshmen.

“We have a really young team and a lot we can work on and grow,” Leary said. “I would like to see us continue to get our team scores better and get more girls qualifying for states.”

“I am a teacher in Hopkinton,” she said. “So my Hopkinton pride runs deep.”