Independent Thoughts: How to save a life

When Hopkinton Fire Chief Steve Slaman showed up at Teamworks in Northborough on July 27 for the KeepSmilin4Abbie field hockey fundraiser, the jokes started almost immediately.

One of the charity games that day pitted a team made up mostly of fathers of Hopkinton High School players against community members, including Slaman.

“When I walked in — and it’s almost a little bit of irony — there were jokes of, ‘We have first-responders here,’ because we had a bunch of us 50-something-year-olds running around in a fundraiser, and we joked about it a lot before playing,” Slaman recalled.

The joking stopped minutes later when an individual in the game collapsed after suffering an apparent heart attack.

Slaman, who just had been retrained in life-saving techniques the week before, and firefighter Scott Jurasek went to work, starting CPR while someone called 9-1-1 and others retrieved a first-aid kit and a defibrillator.

The man was revived with the defibrillator and was back up and walking around later that day, after being checked out at an area hospital.

The fact that Slaman was put on the spot in front of members of the community made the situation a little more tense, if that’s possible, but he came through.

“I’d just as soon not have an audience, but it is what it is,” he said with a laugh. “It puts a little pressure on you.”

With his life-saving work complete, Slaman next turned his attention to the expected follow-up: interest from members of the community in learning how they can do more — especially when the fire chief or another trained first-responder is not on site.

“I see the people afterward that come in here and say, ‘Should I have been able to do something?’ and the looks on their faces,” said Slaman, who noted that a similar incident happened during the Sharon Timlin Road Race a couple of years ago. “I challenge my people that work here every day: You don’t want to miss this opportunity.”

But for those who can’t make the one-time CPR class, there are other ways to learn the basics.

The Federal Emergency Management Agency (FEMA) has a 30-minute video on its website titled “You Are the Help Until Help Arrives” (community.fema.gov/until-help-arrives). It provides detailed instructions on basic steps bystanders can perform in various emergencies when there are no trained personnel on site.

“They address, and I think in an effective way, they talk about the shock factor of having an incident,” Slaman said. “It’s a real thing. And they talk about it well. And I think they do a great introduction so that when Tim goes to do his [CPR class], the dots connect. You’re not in overload.”

Added Slaman: “The thoughts, the fears that will come up to you naturally, it answers questions like, ‘Am I going to make it worse? Am I going to be liable?’ It answers a lot of questions. And the stresses that can come with it, it just talks about it.”

Among the simple instructions in the video:

— Move the injured party away from danger to keep them safe.

— Keep the individual alive until medical responders arrive. This could mean applying pressure to stop bleeding, helping the individual breathe by allowing them to sit up or lean forward, or placing them on their side if they are unconscious.

— Talk to the injured person and provide comfort.

The video also notes that Good Samaritan Laws offer protection from liability for those who give reasonable assistance until professional help arrives.

“It’s preparedness,” said Slaman, who also is the town’s emergency management director. “We’re not trying to be alarmists. But it’s just about being prepared and recognizing that you can help yourself in a lot of these events, where right now a lot of people are coming out of events going, ‘What happened?’ and, ‘Why wasn’t I prepared?’ So this is a nice conversation.”

For those willing to take the next step in preparedness, Healey will train them in CPR and explain how to use a defibrillator (information on the class is available at the Hopkinton Fire Department page at the town’s website, hopkintonma.gov). And even if a participant doesn’t remember everything from the class, they’ll still be ahead of the curve.

“It’s very simple,” Healey said. “But the elements, if you have just a few things that you capture that sticks with you, it makes all the difference.”

While Slaman is hopeful this latest incident will spur more people into action, he’s cautious about expecting too much, too soon.

“I’ve got to start slow,” he said. “FEMA is taking the intimidating factor out of it. I’m giving them that credit. They have their piece, and then if I capture some people and they’re ready, they’ll get more out of our [CPR] class. And at that point they’re ready to do what I did. They’re ready.” 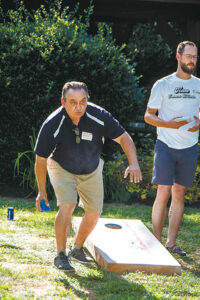 The local branch of the RE/MAX Executive Realty Charitable Foundation, which is presided over by Hopkinton Realtor Sandy Lucchesi, held its inaugural cornhole tournament on Aug. 25 in Medway and had an impressive turnout, with 22 teams and 75 participants/supporters, as well as 19 sponsors.

The charity raises money throughout the year to provide relief to families and individuals within the community who are in need due to health, medical or catastrophic emergencies. Since its inception in 2009 the group has donated more than $150,000 to help improve the lives of local residents.

The organization’s next fundraiser is a 5K road race on Nov. 23.

In the previous issue of the Independent there was an article on a group raising money to update the softball field at Hopkinton High School in honor of the late Lauren Anderson.