Congratulations to organizers of the Lauren Anderson Field Restoration Project, who announced in early October that they had already hit their fundraising goal. The project has raised more than $30,000 in donations and in-kind services since it was launched on Aug. 1.

“Hopkinton has always been a small town with a big heart,” said Kathy Kilduff, team leader. “It has been inspiring to see how many people remember Lauren and are willing to support this project.”

The grassroots project will restore the Lauren Anderson Field at Hopkinton High School in memory of Lauren Anderson, a former student and athlete who died in a tragic horseback riding accident in November 1994. Donations will be used to refurbish the softball field’s scoreboard and add a set of bleachers, two dugouts with benches and bat racks, dugout and outfield windscreens and fence toppers.

Work on the field has already begun. Rich Yurewicz of American Climbers and his crew completed extensive tree work in the early fall. The implementation team, led by HHS graduate Ryan Fowler, is in charge of building the dugouts. Additional work will take place in spring 2020, in preparation for a May field rededication event.

“We are so grateful to everyone who has helped make this project such a success,“ Riki Anderson Rubin said on behalf of the Anderson family. “I wish I had words to express our thanks to each and every one of them, but there are no words that clearly express how truly grateful we feel. The thought that after 25 years Lauren would still be remembered by so many people leaves us speechless.”

Added Kilduff: “Now Lauren’s legacy, her sparkle, will live on for years to come.” 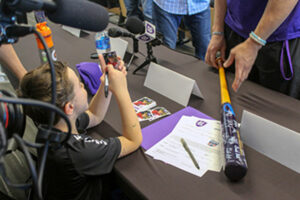 Hopkinton kindergartner Brody McDermott signs a baseball card of himself during a ceremony at Holy Cross where he was named an official member of the team.
PHOTO/HOLY CROSS ATHLETICS

Brody McDermott, the Hopkinton kindergartner who earlier this year was declared cancer-free (a story told in these pages last month), recently was honored by the Holy Cross baseball team. During a ceremony at the Worcester college, the 5-year-old was feted by the Crusaders as part of a Team IMPACT program. Team IMPACT is a nonprofit that partners children facing serious illnesses with college teams. He signed a letter of intent to become a member of the program, then was presented with a Holy Cross jersey, hat and bat signed by the team. He also was given baseball cards of himself, which he signed for the players.

Brody will join the Crusaders for practices, games and other team events during the season.

According to Brody’s mother, Lindsay, all of the HC players came to Hopkinton for Brody’s cancer-free celebration in late summer. HC coach Greg DiCenzo is a Hopkinton resident.

The Hopkinton-based charity Project Just Because is holding a fundraiser this fall. It’s called “A full heart can make a difference.”

Those who donate — by buying a piece of the PJB “heart” — will have their name (or child’s name or family name or company name) displayed on the organization’s South Street building for all of 2020.

For more information or to make a donation, visit projectjustbecause.org.

PJB also is seeking volunteers who can commit to two hours every week on an ongoing basis, helping fulfill basic necessities for those in need. For more information email pjboffice@comcast.net.

← Unified basketball brings school together Letter to the Editor: Dead trees a danger →