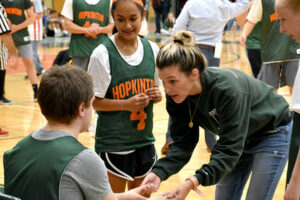 The Hopkinton High School unified basketball team saw a surge in numbers in its second season, with nearly 40 partners joining the program’s four athletes in an experience that has been special for all involved.

“It’s really, truly rewarding to build that relationship with our athletes,” said Jay Golden, who coaches the team along with fellow special education teacher Caitlin Burke. “Day-to-day, when we have our practices and games and other team activities, those relationships lend a lot of perspective to our kids and they seem to really appreciate it.”

“We didn’t have a ton of seniors last year so we had a lot of kids returning, and word of mouth gets around about what a great experience it is,” Golden said. “Kids play, they talk to their friends about it and bring them out.

“We are a varsity sport, so it’s even more impressive that so many kids have come out. If they are with us, they can’t play varsity soccer or football or field hockey — you do one or the other.”

The partners work with the team’s athletes. The latter group includes Ryder Peishoff, a senior who played with the team last year.

“He is a huge Providence Friars hockey fan,” Golden said, due to the fact that Peishoff’s sister attends the school. “He is always wearing his gear. He is our 3-point specialist. He’s a great 3-point shooter and it’s been a lot of fun having him.”

Grant McNamara is part of the 18-to-22 life skills program at HHS and another returning athlete. Senior Liam Finnegan has brought a great energy, his coach said.

“He is funny, always smiling, just a great kid to have on the team,” Golden said.

Jack Malone, an eighth-grader, is new to the program, and Golden said he has been a great addition.

The creation of Hopkinton’s program has come at a time in which many area schools are embracing unified sports. The Hillers meet three times per week, either for practices or games, over the course of an eight-week season that begins in late September and extends to mid-November. Neighboring towns, including Holliston, Bellingham and Natick, have added teams and are on the Hillers’ schedule this fall.

The games will conclude with a round-robin-style jamboree. As of mid-October the location of this year’s tournament was still to be determined (it was held in Auburn last year). The season will conclude with a team dinner and banquet to celebrate the year and the athletes and partners who participated.

Golden said he and Burke jumped at the opportunity to lead the team when it was created a year ago.

“It melded two of our greatest interests and seemed like a natural fit,” he said. “It’s been really cool to bring this to Hopkinton.”