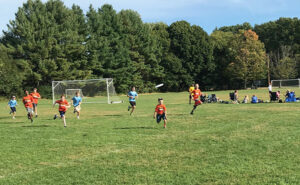 Hopkinton youngsters participate in a game of Ultimate, a sport that is gaining popularity in town.

In 2017, Liz Siber walked into the Hopkinton Parks and Recreation office looking to find a way to introduce youth to Ultimate, a sport she picked up as a graduate student in 2001. With support from Parks & Rec and Boston Ultimate Disc Alliance (BUDA), Siber started a Sunday afternoon program that attracted about 16 kids, coached by a few high schoolers. This fall, Hopkinton Youth Ultimate League drew nearly 40 participants.

Also known as Ultimate Frisbee, after the brand-name disc, or as Flying Disc, Ultimate first came about in 1968 when played by a group of high school students in New Jersey. Now the World Flying Disc Federation oversees the sport, which is played by millions in 84 countries. The non-contact sport, played on a field between two teams of seven players, combines aspects of soccer, football and basketball. Positions include handlers, mids and deeps playing in offensive and defensive formations. One unusual aspect of the game is that it is self-officiated and relies on players to uphold the spirit of the game.

“My favorite parts are watching these kids learn the rules and have discussions about them while playing,” Siber said. “This teaches them fairness and composure at a young age. For example, kids can call themselves out of bounds if they catch the disc out of bounds. Kids can help an opponent who is not certain if he caught the disc by saying, ‘Yes, that was a fair catch.’ Kids learn unique things about each other during our ‘spirit breaks,’ which fosters mutual respect of teammates and opponents.”

The Hopkinton program meets once per week, on Sunday afternoons behind Hopkinton High School, and includes students in Grades 1-8. As well as the sport being fun, Siber feels that part of the league’s appeal is due to the fact that it’s not a big-time commitment for kids or parents.

“Only older kids go to one or two tournaments a year,” Siber said. “It’s low cost because we just need a field, a disc and cones, and it’s a pretty fast learning curve for picking up the basics.”

Initially, the kids Siber saw coming to the Hopkinton program hadn’t really found another sport they loved. Now she sees a combination of kids looking for their niche and youngsters who also enjoy other sports, including football, lacrosse, soccer and hockey. This fall, the Hopkinton program included its first middle school team that competed at a tournament at Devens, and sent a group of girls to BUDA Girls Day with coaches from the Brute Squad, the top women’s team in the nation.

Of the Hopkinton league, Siber said, “It’s competitive, but it’s balanced not to burn kids out or take up too much time from kids or parents.”

Registration for the program (fall or spring leagues) is through Hopkinton Parks and Rec (hopkintonma.myrec.com). Siber also runs a one-day clinic over winter break and a summer camp. Information about other leagues in the area can be found at buda.org/u14.