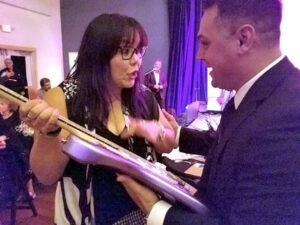 Christine Chapman reacts as fellow HCA board member Jim Valis presents her with a handmade guitar that was gifted to her by a patron at the organization’s fundraising gala Nov. 2.

The Hopkinton Center for the Arts already has provided Christine Chapman and her family with a lifetime of positive experiences.

Little did she know that when she attend the HCA’s Nov. 2 fundraising gala, she would have another tremendously uplifting moment.

This year’s gala was themed “This is Me.” It’s a reference to a song from the musical “The Greatest Showman,” focusing on self-acceptance and self-expression through the arts.

Chapman can relate. The HCA helped her through some rough times, and she went from someone who just attended concerts and other HCA events to becoming much more involved, culminating with her joining the HCA board in March of this year.

“It’s been such a life-changing place for us, and a place of connection and of growth and of transformation,” she said. 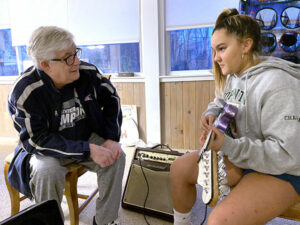 Celia Chapman plays her new guitar as Stan Pulnik, who made the instrument, offers her tips.

At the gala, Chapman and her 13-year-old daughter, Celia, took part in a presentation that included a performance of the song “This is Me.”

“Prior to the song being sung, all of the folks who were in the presentation came out and shared their story of the impact of the arts on them as individuals,” recalled Chapman, whose daughter and son both are involved with the arts. “And my story was that the arts were a source of healing and processing of loss and grief and transition. I lost my mom and dad, my grandmother and my grandfather, and got divorced literally within about 18-20 months. It all sort of happened together. And at the end of the day when I look back on all of it, it really was the HCA that was the source [of healing] — I say the HCA, it was the arts, but here in my town the arts translated into being involved with the HCA in some way, shape or form.”

Later in the evening, there was an auction. One of the items up for bid was a purple guitar that had been handmade in Hopkinton by Stan Pulnik.

Chapman, who co-founded and runs the downtown Hopkinton tutoring facility Education Station, was quite taken by the instrument. As was her daughter.

Celia, who also goes by Cece, is a talented singer who also plays the piano, guitar and ukulele.

Recalled Chapman: “She picked up that guitar and she basically looked at me and said, ‘Mom, I know this is not even a possibility and that I’d never be able to get this guitar, but if the business takes off like we’re hoping and everything works out well, do you think at some point in time you’d be able to buy me a guitar like this? Could we meet the man who built this guitar and possibly look at acoustic guitars or electric guitars like this one and see even what it would cost?’ I said, ‘Of course. You know what, it’s going to be auctioned and who knows?’ ”

When the bidding began, Chapman took part. She went up to $1,000 — at that point partly to push the bid higher to get more money for the HCA, knowing that in reality it was over her budget. However, for a brief moment she was both excited and concerned that her bid might be the winning one.

“There was a part of me that was, oh, man, what if nobody bids beyond?” she said. “Well, whatever. We’ll eat peanut butter and jelly sandwiches for the next couple of months. It was one of those moments.”

However, a man she did not know, who was sitting at the same table, topped her and won the guitar with a bid of $1,250.

With a mixture of disappointment and relief, Chapman congratulated the winner. About 15 minutes later she saw him again, and he told her that her friend and fellow HCA board member Jim Valis was looking for her.

Valis and Darlene Hayes brought Chapman over to the stage and told her they had a special presentation. It was the guitar. The auction winner, apparently moved by Chapman’s speech, decided he wanted her to have the instrument.

The gesture brought Chapman to tears.

“I was weeping,” Chapman said. “Uncontrollable weeping, but they were happy tears.”

Added Chapman: “I think it was just that this donor sort of made that connection because he had probably just seen me on stage with my daughter, and there I was bidding against him on this guitar. ‘Who’s this Asian lady with purple hair who was just out there with her daughter who’s now bidding on this guitar? Oh, shoot, could she be bidding for her kid?’ It was just very powerful.”

Chapman was not able to connect with the man again that evening, but she was able to get his contact information so she can reach to him and express her heartfelt gratitude.

“I just hope he knows what an impact he made on a little girl who probably didn’t think she was going to own a guitar that looked anything remotely like that, let alone be hand-made by a man in Hopkinton, until she was much, much older,” Chapman said.

In the meantime, Pulnik, who built the guitar, stopped by the Chapmans’ house three days later to give Celia a hands-on lesson on how to take care of it.

Said Chapman: “Her face just lit up, talking to Stan about the guitar.”

Chapman said she remained emotional for days just thinking about what happened.

“It’s just such a feel-good story,” she said. “It gives us hope when things feels uncertain sometimes. … [Celia] and I and our whole family, we’re just blown away that this could happen.”

Chapman said people have been reaching out to her after seeing Facebook photos of her crying and wanting to know if everything was OK. She replies that they are tears of joy, and she doesn’t mind the “unflattering” images making their way around social media.

“I hope it gets shared with a lot of people and with as many folks who sometimes lose hope that there are good people out there,” she said. “There is so much good and generosity in the world, and it’s right here in our own town. It’s pretty cool.”