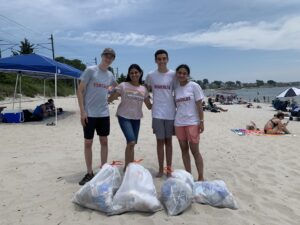 When members of the Hopkinton High School organization Beachlex head to the ocean this summer, it’s usually for something more than soaking up the sun or going for a swim.

Members are making trips to beaches around Southern New England to beautify the areas and protect the ocean’s inhabitants by picking up trash.

“We both want to provide knowledge and promote awareness for the ocean’s creatures, hoping to educate the general public so that in turn these creatures can be conserved and protected,” explained Beachlex founder Gabe O’Brien. “Through beach cleanups we hope to push past the educational piece for our organization and actually get our hands dirty and do some activist work. Now with COVID restrictions being lifted, in-person events such as cleanups are able to happen, and clean-ups are a great way for people to get involved with ocean conservation efforts.”

The group’s first trip was to Rocky Neck State Park Beach in Connecticut, where they met up with a similar student-run group called Teens for Sharks. The Beachlex representatives — rising seniors O’Brien, Sreya Ravi, Chaitrali Samant and Jacob Waxman — picked up four bags of trash in two hours.

“This was the first cleanup in a series of cleanups that we plan to do this summer,” O’Brien said. “Our next stop is going to be at Onset Beach in Wareham, the Buzzards Bay area. We hope to do five this summer in New England.”

The organization, which now includes students from other states and Canada, has other initiatives and fundraisers to help increase awareness of the ocean environment. For more information, check out its website at beachlex.org.

The Hopkinton Open Space Preservation Commission (OSPC) recently improved the signage on the trails within Cameron Woods, which is located off Wood Street. The work was performed by Hopkinton Area Land Trust (HALT) volunteers, led by OSPC vice chair Steve Levandosky and HALT president Morrie Gasser. Cameron Woods can be accessed from the parking area on Whisper Way.

The OSPC and HALT, along with Friends of Whitehall (FOW), also recently spruced up the Whitehall Conservation Area. Wood chips in the parking area were donated by Joe Regan of Joe Regan Tree Work and spread by members of FOW.

“As the wood chips decompose and are crushed into the ground by vehicles we expect that process will help to keep the soil around the sugar maple loose, which will be beneficial for the tree,” explained volunteer Ed Harrow.

In the spring, members of HALT and the OSPC, under the guidance of Chuck Dauchy and with assistance from Mike Boelsen, spent a day doing invasive removal work in the meadow area of the Whitehall Conservation Area.

The Hopkinton Center for the Arts celebrated the opening of its new temporary dance studio at 22 South St. on July 1. Two weeks later, the HCA hosted an open house for dance students and their families to check out the new facility.

Under the direction of Jessica Wilson, the dance program has seen tremendous growth in the past few years. The HCA had rented a building downtown just before the pandemic, then shifted the program back to the HCA building on Hayden Rowe Street. The eventual plan, executive director Kelly Grill said, is to construct a new building between the HCA’s main building and the Terry farmhouse, which is being renovated.

“The program is big enough that it warrants its own space,” Grill said.

A pair of talented Hopkinton teenagers will make an appearance on the Town Common this Sunday (5 p.m.) with Electric Youth, a high school performing arts group. Kelsey Breslin and Finley Doherty are members of the prestigious 14-person ensemble, whose shows consist of singing and dancing to hit songs, with backing by the Boston Show Band.

Electric Youth is coming off a four-week tour of Austria and Italy, where the group performed 14 shows.

Breslin, who graduated from Hopkinton High School in the spring and is headed to the University of Tampa, is in her fourth year with Electric Youth. Doherty, a rising sophomore, is completing her first season.

The group, which is based out of the Franklin School for the Performing Arts, will perform in town as part of the Parks & Rec Concerts on the Common series.