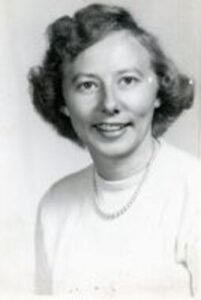 Shirley Lyon (Packham) Southwick, 88, of Gloucester, died July 10 at her home in Gloucester. She was born Jan. 4, 1933, in Everett, daughter of the late Walter and Marion (Lyon) Packham. She is predeceased by her husband of 50 years, Rev. Philip Southwick, and her sister, Betty Cooke of Rowley.

After graduating from Everett High School, Shirley attended Boston University’s College of Liberal Arts, where she met her future husband, Philip, and received her Bachelor of Arts degree. She taught elementary school in Hopkinton. Later in life, she attended Salem State College, specializing in learning disabilities, then teaching in the Merrimac public school system. She also taught at the Pentucket Workshop Preschool in Georgetown. She was active in the Georgetown First Congregational Church, teaching Sunday school and participating in the handbell choir, church band and guild. After her husband’s retirement, she was active in the West Gloucester Trinitarian Congregational Church.

A graveside service at Harmony Cemetery, Central Street, Georgetown, will be held on Wednesday, July 28, at 11 a.m. It is open to the public. A memorial celebration of life will be held at a later date.

Donations in her memory may be made to the West Gloucester Trinitarian Congregational Church, UCC, 488 Essex Ave., Gloucester, MA 01930, the First Congregational Church of Georgetown, UCC, P.O. Box 200, Georgetown, MA 01833, or the hospice or charity of your choice. To share a memory of Shirley with her family, visit the Conte-Giamberardino Funeral Home website at cgfuneralhomegeorgetown.com.