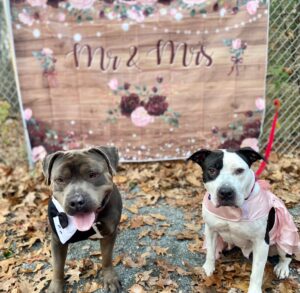 Two bonded dogs who are up for adoption, Mumble (left) and Lola, were “married” in a ceremony at Baypath Humane Society in Hopkinton on Nov. 20. PHOTO/BAYPATH HUMANE SOCIETY

During the peak of the pandemic, it was easy for shelters such as Hopkinton’s Baypath Humane Society to get dogs and cats adopted. Many people were stuck at home and had more time on their hands, so they looked for companionship from pets.

It’s more difficult now, which means shelters have to get creative to get people’s attention.

Baypath has been doing just that. The organization sends out an Adoptable Animal of the Week to this newspaper, which we are proud to promote.

Last month, Baypath focused on finding a home for two 4-year-old dogs, Lola and Mumble (this week’s Adoptable Animals). One obstacle is the dogs’ sizes. While Lola checks in at around 50 pounds, Mumble is closer to 90. That can be a challenge for many people.

The other hurdle is that the dogs have become very close since they bonded as puppies, and the shelter determined that they should be adopted together.

“The two dogs came to us as an owner surrender,” explained Kathy Lundgren from Baypath’s Outreach Committee. “It wasn’t a behavioral reason; it was more of a change of lifestyle. We noted right away that they were very bonded. They always look for each other, and they cry when they are separated. It’s heartbreaking.

“We’re just looking to place them in a home together. They’re not hyper dogs, but they’re big dogs, so we know it’s a big ask.”

In an effort to spark some interest, Baypath decided the two lovers should get married. For a week, the shelter posted dozens of photos on its Facebook page of the dogs preparing for the Nov. 20 event. There was a bachelor and bachelorette party, a day of beauty for Lola, a ring bearer, a ceremony and a reception.

There has been some interest in the dogs, who have been at the shelter for couple of months, but no takers for both of them as of yet.

With people getting back into somewhat regular routines, that’s not a complete surprise.

On a positive note, concerns about “pandemic puppies” being returned once people got back to normal schedules has not been a major problem at Baypath.

“We’re starting to see a few rehomings, there is a small percentage that is coming back, and we were afraid of that, but it’s not what we were predicting and what the ASPCA and Humane Society were predicting,” Lundgren said.

Baypath does its part to ensure a smooth adoption process by including a consultation with its trainer as well as one week of free phone/online consultations with a national training service called GoodPup.

And in December the organization plans to start a campaign to promote training tips.

“Starting December 14th we’re going to post 12 ways to keep your dog or cat off the naughty list,” Lundgren said.

The event always gets a good turnout from Hopkinton youth basketball players and others (ages 9-14), who shoot free throws to determine winners in a variety of age groups.

Trophies and medals are awarded to the top three finishers in each division, and winners move on to compete at the district level.

Those interested in competing can register at the gym before the event, starting at 7:30 p.m.

The front-page photo in our Nov. 24 edition featured a group of girls performing a dance at a Diwali celebration. That much was correct.

We’ve included a photo from the Phase 3 event on this page, with apologies for the error. 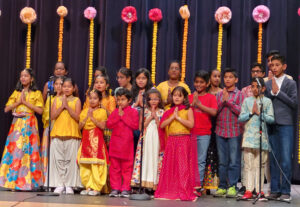