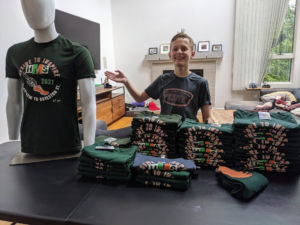 A Hopkinton High School student’s compassion and his mother’s hobby have combined into an effort to spread messages of inclusivity through a home T-shirt business.

Jen Halliday said her 14-year-old son, Dimitri, better known as Dee, began creating shirts with unique designs about seven years ago as holiday gifts. Silk-screening has been Jen’s hobby for years, and she saw this as a means of incorporating Dee’s artistic skills.

“It just kind of snowballed from there,” she explained.

The family moved to Hopkinton about three years ago from Cape Breton Island on Canada’s east coast due to her husband’s job. Before the move, Jen had been a volunteer for her local society for children with disabilities since her younger son, Ciaran, is on the autism spectrum. The organization always is trying to raise funds for programs like after-school care and summer camps, and the shirt sales became a means of support.

“We did a fundraiser for them, and it has just been one of those things that we did for them,” Jen said. “All of the proceeds went to the society.”

Neither Jen nor Dee had an original intention to create Dee’s Tees or make anything beyond gifts, Jen explained.

“Dee was really interested in fashion, and he liked the idea that you could put anything you want on a T-shirt,” Jen said. “With Dee’s Tees, there was always something we could speak about. And people really seemed to like what we were doing.”

One of those people was Amanda McDougall, who became mayor of the Cape Breton Regional Municipality last November.

When she started out as a councilor there, she was chosen to serve on Nova Scotia’s solid waste resource management committee. However, Dee — then only 8 years old — perceived that she was being bullied by her older male colleagues.

In response, he wrote her a handwritten note of encouragement and sent her a T-shirt with the words “Amanda McDougall for Mayor” with a drawing of her trademark horn-rimmed glasses.

“She wrote back to Dee and said that if she ever ran for mayor, Dee could design her T-shirts,” Jen said. “And she did. She ordered 300 shirts.”

Dee produces the designs for the shirts while Jen imports them into a computer for the silk-screening process.

Jen never intended to become interested in silk-screening. When she was younger, she lived with her brother in Toronto while he was studying art. She came upon a silk-screening kit and discovered her own creative side. Her career in Canada was an orthotist and prosthetist, making artificial limbs and braces for people with disabilities. 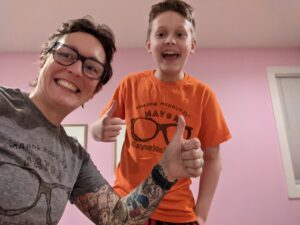 Dee Halliday, with his mother, Jen, designed a T-shirt for a mayoral candidate in his previous hometown of Cape Breton Island in Canada.

The most recent success story for Dee’s Tees was being able to create a shirt design for Hopkinton Middle School Principal Alan Keller for his 2021 Boston Marathon run. Keller ran to raise money for the school’s Desire to Inspire program, which focuses on the themes of leadership, endurance and tenacity. Keller also began selling the T-shirts in support of the program.

“That was really the first big feather in our cap since we moved here,” Jen explained.

Dee’s Tees (facebook.com/deestees2016) had a big order in early 2020, when Dee designed shirts for the six classroom teams at Hopkins School. They were supposed to be sold at a basketball game in March.

“Two days before the game, the world shut down,” Jen explained, noting the family went back to Canada for four months. Money from the pre-sale went to the school to buy personal protective equipment.

Jen said she has become deeply connected to Hopkinton, particularly because of her involvement with the 18-22 program for students with disabilities who benefit from additional vocational and independent living supports.

“Young adults can get experience with different skills that will help them get employment in the future,” she said. “In June, the kids in the program made two different designs for T-shirts for Suicide Prevention Month in September. They had almost 200 orders.”

The slogan was, “Life is better with you in it.”

The money raised will help the students be able to run a business out of the 18-22 program.

She noted that the shirt designs are not perfect, which adds to their meaning. They are traced by students with disabilities, so every shirt is unique.

“We came up with the template, but they put their own flair to it,” Jen said. “The response has been fantastic.”

She envisioned the students creating a business that would support local shops by making shirts or even greeting cards.

“Dee’s Tees has helped to create something better for the future,” Jen said. “You’re helping people and spreading awareness.”

While Jen was excited about the momentum, she noted that Dee “doesn’t like getting recognition for what he is doing and is painfully shy.”

“He’s proud of what he’s doing, but he doesn’t want people to make a big fuss,” Jen noted.

Shared Dee in an email: “I’m proud of Dee’s Tees. They are fun, and I like helping people.”