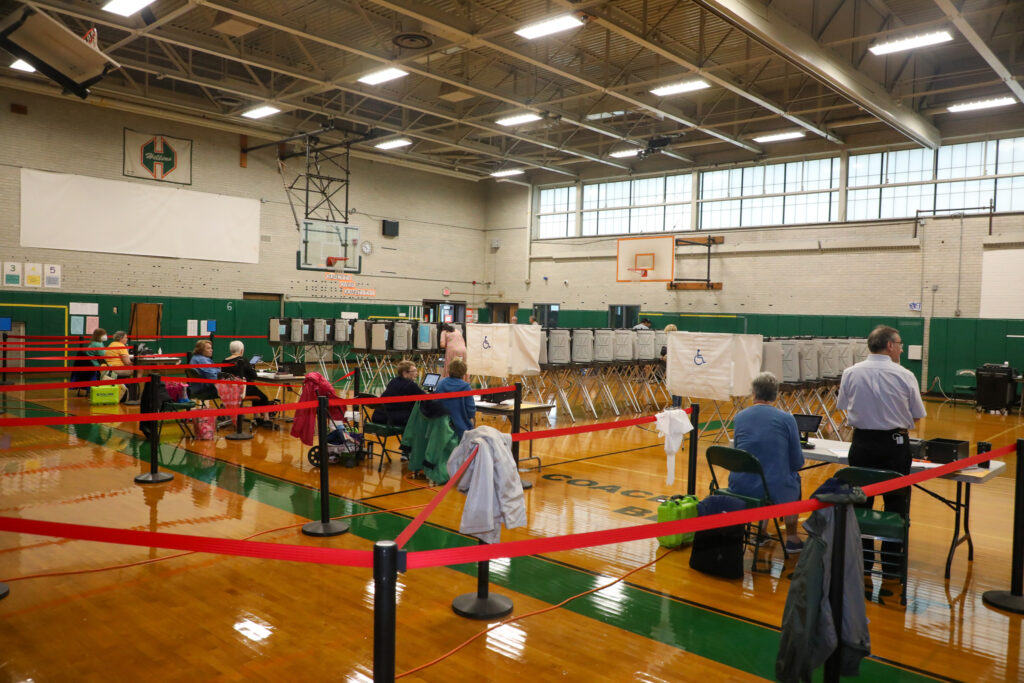 Elections in Hopkinton — including the Sept. 6 state primary — typically are low-key affairs, but some people apparently are convinced the town is part of a wide-ranging conspiracy. PHOTO/JOHN CARDILLO

If you follow national politics, undoubtedly you have heard about the ongoing movement by Donald Trump-supporting conspiracy theorists to challenge the results of the 2020 presidential election by going after local election officials.

It wouldn’t seem likely to directly affect Hopkinton. After all, we are a small town in a reliably Democratic state, and there’s nothing that stands out as concerning about our election results.

Yet, common sense is a quality lacking in national politics these days.

Town Clerk Connor Degan said he has been “swarmed” with requests for information — sometimes including data that doesn’t exist or can’t legally be shared — and threats of legal action. The requests are coming from individuals outside Hopkinton, and often outside Massachusetts.

Degan explained that federal law indicates ballots be destroyed 22 months after an election — in the case of the 2020 presidential election, that meant Sept. 3 of this year — which is why the requests poured in recently.

“We were advised to hold onto the records a little bit longer,” Degan said of consultation with town counsel. “They basically put a hold on our destruction, so now we have to hold them for longer and have them take up space that we need for other records. That’s what the timing is about. They waited until the last minute to try and cause the most damage.

“If they really wanted this information, they would have asked two years ago. They don’t actually want the info, they’re just trying to see how much damage they can cause.”

The requests come from individuals — “Some of them are kind of frequent flyers for harassment emails and stuff, and others are just crawling out of the woodwork now, at least in this area,” Degan said — but he noted it’s clear that they are taking their cue from national organizations.

“One guy who is one of the larger requestors right now is from New Jersey,” Degan shared. “He has two separate records requests into us plus a notice of prospective litigation.”

Degan said the emails include text that clearly is duplicated, and it’s obvious the requests are tailored for different states, because some of the information does not make sense for Massachusetts — including references to county elections and data that does not exist or legally can’t be shared.

“You can tell it’s part of this national push from Mike Lindell and his people,” Degan said. “They just copied and pasted it and added their own email signature on the bottom and sent it off.”

Degan, a Democrat, noted that accusations that computerized voting records were sent overseas and returned with fraudulent information does not fit with the way the state runs its elections.

“In Massachusetts, all of our election equipment is not connected to a network,” he said. “All of the tabulators that you see when you are casting ballots, those are solid-state, internal-only systems, and the only information that we get out of them is the receipt tape that is printed at the end of the night. So when they say, ‘Oh, we want your cast-vote records and this and that,’ well, we don’t have any of that. We have a receipt for this, and that’s all we’ve got.”

Because the requests are extensive, the town is allowed to charge the requestor for the time it takes to assemble all of the requested information. Degan said in a best-case scenario, it would take about seven hours to gather the requested data that can be provided.

At least Degan said he has not received any direct threats. He did deal with a few angry residents immediately after the 2020 election, but he said he was able to resolve those by explaining why their concerns were without merit.

“I had one person claim that there were more people who voted than were even eligible to be registered to vote in Hopkinton,” Degan recalled. “They thought that there was no way Trump was going to lose by the margin he did in Massachusetts, and the only way he did was because they had a whole bunch of people who voted who weren’t on the lists, so they could consider it as an additional vote for Biden. However, that wasn’t the case. It was just a very loud minority that was pushing for Trump in Massachusetts.

“So, we were able to head it off. Whenever there is misinformation that starts spreading, I try to inject facts so we can resolve it quickly.”

The Hopkinton Sustainable Green Committee is co-sponsoring an electric vehicle expo Saturday, Oct. 15 (rain date is Oct. 22), from 2-5 p.m. at the Amazon Robotics facility at 50 Otis Street in Westborough. The free event will bring EV owners from Hopkinton and nearby towns together to show their vehicles, share experiences and answer questions. There will be information about charging and the latest EV purchase incentives.

“We’re hoping to attract hundreds of visitors from Hopkinton, Westborough, Northborough, Shrewsbury and other nearby towns, and hope the interest will lead to it becoming an annual event,” shared committee member Linda Chuss. “A few of us from the Hopkinton Sustainable Green Committee have collaborated with representatives from the equivalent committees in neighboring towns to plan the expo over the past few months, which in itself has been a great opportunity to learn more about how our various communities are approaching sustainable transportation.”

Chuss said she hopes the Hopkinton Police Department will stop by to show one of its hybrid cruisers and maybe an e-bike as well. Some other police departments are scheduled to appear with their electric cruisers, including a Mustang.

“The expo provides a no-pressure environment for people considering EVs to check out a variety of makes and models with familiar faces they trust,” Chuss added. “We also intend to provide information on charging at home, at apartments, at work and on the go.”

Hopkinton’s Jeff Curl is leading the first annual chili cook-off at United Parish Church in Upton on Saturday, Oct. 22, from noon-5 p.m. Brian Le Suer, another United Parish volunteer from Hopkinton, notes that the event replaces the annual turkey supper that had a 100-year run serving patrons from the surrounding communities (including Hopkinton).

“We expect this to be a fun food event for the whole family,” Le Suer shared, encouraging fellow Hopkinton residents to attend. The church is located at 1 Church Street, Upton. For more information, visit unitedparishupton.org.

The Jimmy Fund Walk has raised more than $155 million for the Dana-Farber Cancer Institute in its 33-year history. Visit JimmyFundWalk.org to sponsor a walker.