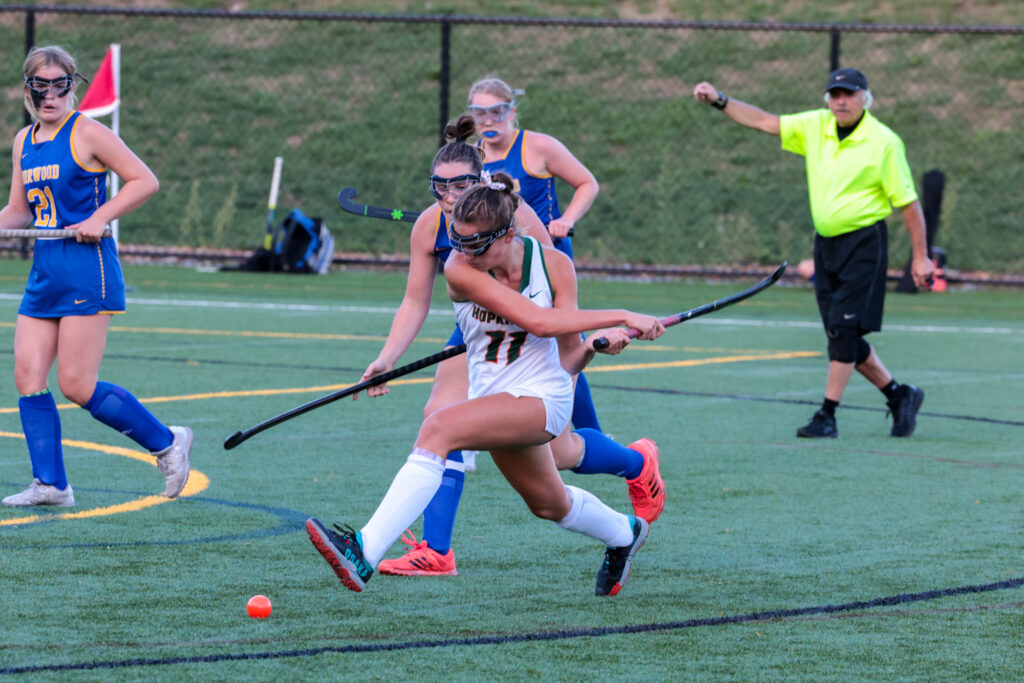 The Hopkinton High School field hockey team has a simple motto this season: “Win the day.” The Hillers are playing under first-year coach Ally Valencia and are razor-focused on trying to improve and succeed each day, whether it’s during a game, in practice or while training.

“We are locked in on taking it one day at a time and doing what we can do to win in practices,” Valencia said. “During games, we want to try to win each quarter and use that strategy to win the game.”

The philosophy has not always come easily through the first part of the season, and Valencia said her team has been prone to the occasional breakdown during parts of games, but knowing that tendency has been useful when it comes to improving.

“Knowing is half the battle, understanding your weaknesses,” she said. “We are working on breaking up plays early on and preventing breakaways so we don’t even have the threat of the opponent scoring.”

Valencia is new to the program after having been hired during the offseason. She spent several seasons as an assistant coach at Foxboro High School and, most recently, has been a coach at the club field hockey level. She inherits a team that includes a strong attack line consisting of junior captain Camille Perlov, senior captain Maya Ghosh and junior Kiley Locke.

“Those are our three players on the front line and they are all returning varsity starters, so I have a lot of good, high expectations for them to put points on the board for us,” Valencia said.

Returning starter and captain Maura Souza also is back and figures to be a force in the midfield.

“She is such a great presence, she can really control the play and does a great job of breaking up plays,” her coach said. “She is good at sending the ball up to support the offense as well.”

Erin Halloran returns as a senior captain to round out the team’s leadership this fall along with fellow senior Hanna DeBoer. Madison Hadley, another senior, is back as the starting goalie in front of a stout defense that includes juniors Alison LePage and Lauren Strechay.

“They have been our starting back two, but the depth we have on defense is fantastic,” Valencia said. She cited junior Callie Weston as another player who can break up plays by the opposing team and help set up the Hopkinton attack. Valencia cited her team’s ability to get up and down the field as something that should pay dividends this fall.

“Our team speed is super important and I think it’s a huge advantage for us,” she said. “We have a very fast team and we have a lot of skill, which I hope will translate into a lot of goals.”

When she last coached at the high school level, Valencia coached in the Hockomock League, which is known as one of the better leagues in the area. But she has been very impressed by the level of competition Hopkinton faces in the Tri-Valley League. She praised the Hillers for how they have handled the tough slate — going 1-2-1 in their first four games — and said hers will be a team to watch during the fall campaign.