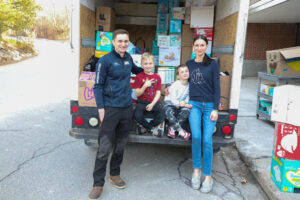 The Parkhomenko family (from left), Victor, Nikita, Robert and Maryna, takes a break after loading a truck with baby supplies donated by Elmwood School families. The items are to be shipped to Ukrainian families in need. PHOTO/JOHN CARDILLO

It’s been an emotionally challenging time for the Parkhomenko family — parents Maryna and Victor, 8-year-old Nikita and 6-year-old Robert — Ukrainians who have lived in Hopkinton for two years.

But a gesture from the Elmwood School community — in the form of thousands of donated diapers and other baby items — has offered a little solace while the Parkhomenkos’ home country has been under attack by neighboring Russia.

Maryna put out the call for assistance after being contacted by Nikita’s third-grade teacher, Dena O’Shaughnessy, who wanted to know if there was something she could do.

“I just ask [for her to] pray for everyone,” Maryna said. “Then when I saw all this information about kids and newborns [needing supplies], I sent her a letter that if they can organize this donation for Ukraine, I would appreciate it and I will ship it at my own cost.”

O’Shaughnessy let Elmwood families know about the situation, and the donations starting pouring in immediately after — “Much more than we expected,” O’Shaughnessy said. “People have been so generous. It’s truly amazing.”

On March 11, the Parkhomenkos brought a box truck to collect the donations and prepare them for shipping.

It was a rare positive moment in what has been a terrifying few weeks for the family. Maryna’s mother lives alone in Kyiv, which has been under fierce attack. 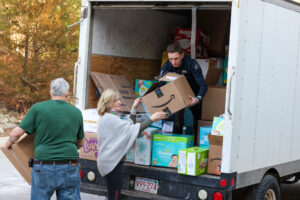 Elmwood School teacher Dena O’Shaughnessy hands a box of baby supplies to Victor Parkhomenko on March 11. The donated goods are to be sent to Ukrainian families in need. PHOTO/JOHN CARDILLO

Maryna said she has been able to talk to her mother daily, and she said her mother does not want to leave despite the danger. She noted it’s also dangerous for those trying to find a way out of the city.

Meanwhile, Maryna said the family has lost contact with her husband’s relatives due to damage caused to communication lines in their town.

Nikita, the Parkhomenkos’ third-grader, is eager to know what is happening in his birthplace of Kyiv.

“We talk about it. We didn’t talk about COVID, but about war, yes, we talk,” said Maryna, who also has a 6-year-old son, Robert. “Nikita was born in Ukraine and we are from there. They are our relatives, and [the boys] need to know. I try to explain everything to him. But he’s too young to understand how dangerous it is. He doesn’t understand, but every morning he asks, ‘Did Ukraine win?’ ”

In Nikita’s class, O’Shaughnessy said she has delicately introduced the topic.

“What we’re doing at this level, when I announced to the class that we would be collecting supplies, I said for babies in the Ukraine, some of them don’t have homes any longer and they just don’t have the things that they are used to having in a hospital here in the USA,” O’Shaughnessy said. “And then several students raised their hands and said, ‘I know what’s going on in the Ukraine.’ So before we even brought up the topic that Russia had invaded the Ukraine, my students were very well aware of what had been going on.

“But at this grade level we’re just keeping it to the point of being good global citizens. I like to use that term at this level because we’re focusing a lot on empathy and kindness at Elmwood School this year, so we’re trying to focus on we’re helping babies in need. That is something that they can connect with. We’re trying to stay away from all things related to the violence. Because some of the kids may have some awareness and some may not.”

The class also used the donation collection as a math exercise as they kept track of the different items.

“They’re more excited about their diaper total going up,” O’Shaughnessy said with a laugh. “That’s where their focus is. [On a recent] afternoon, I had one little boy say, ‘Mrs. O’Shaughnessy, it’s a miracle, we have over 2,000 diapers. The joy in his face — they know they’re doing something good for somebody else, but the joy that they’re getting to say, ‘We have 43 pacifiers today,’ that’s sort of their level of thinking about it now. [Principal Anne] Carver was in the room taking a peek at what was going on and we had tears in our eyes, because what was happening was amazing.”

Friends of Hopkinton is eager to see town-wide gatherings return, and this week the organization will get things started with a family event at the Town Common.

The inaugural Family Fling will run from 10 a.m.-2 p.m. and feature a scavenger hunt, football toss, cornhole, hula hoops, bubbles and more. There is no fee to participate. Dunkin’ is providing free hot chocolate, coffee and munchkins.

“It’s actually to keep our name out there, because it’s been two years since we had an event,” explained Ann Click, one of the organizers. “We just wanted to do something. We all feel like breaking out. And basically, we’re feeling more comfortable about offering an outside activity.”

For more information on Saturday’s event, which is co-hosted by the Hopkinton Lions, visit friendsofhopkinton.org.