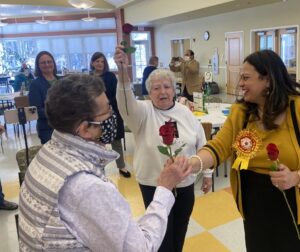 Hopkinton’s Shova Sharma (right) hands out roses to older adults at the International Women’s Day celebration in Northborough on March 8.

“The New England chapter … started celebrating last year,” Sharma said. “Our main objective is to empower women, and every year we have a theme: what we can do better for our community.”

The Federation of Indian Associations (FIA) targeted older adults for appreciation this year. Sharma organized the March 8 festivities at the Northborough Senior Center. She estimates some 70-plus seniors attended the event. Volunteers from Hopkinton joined Sharma as well.

“[The seniors] sacrifice their needs and take care of families and community,” Sharma said. “They never prioritize themselves, always thinking of others. Nothing is better than saying thank you on International Women’s Day to our seniors and providing lunch and roses.”

The event featured a panel of community leaders, including We Care Charity founder Stefani Kalyani and Gallagher Real Estate agent Jasmin J. Ortiz, among others. Panelists discussed the significance of International Women’s Day and overcoming biases against women steeped in society today.

Sharma, FIA event chair Mukta Munjal and the volunteers praised local women leaders for their contributions to the community, awarding them a certificate of appreciation.

Sharma views the good will women can contribute as functioning in a pyramid-like setup.

“I have individually helped 19 women to find a job,” she said. “Some women just need a little push, they don’t believe in themselves. So if I, one person, can help 19 women, imagine how many women are in a position that they can help thousands and thousands of other women.”

“I believe it is critically important to celebrate the cultural, political and socioeconomic achievements of women, and I am very pleased to see the federation’s event,” Kane said, adding: “As a strong advocate for the advancement of women and for women’s rights, I deeply appreciate the opportunity to shine a spotlight on gender equality and reproductive rights and to give voice to the ongoing need to curtail violence and abuse of women.”

Sharma said she worried at first about how the guests would react to the event. But every guest greeted her with hugs and smiles.

Sharma said the guests were surprised to hear “Happy International Women’s Day,” and they were appreciative to receive a free lunch and roses.

The Hopkinton resident gave credit to her fellow volunteers, including FIA New England President Abhishek Singh. She describes Singh as a great leader “behind the scenes” at FIA. Singh and other volunteers, including men, helped set up decorations, manage the livestream and coordinate other technical aspects for the celebration.

Fighting against gender biases requires a team effort, according to Sharma. But it can begin with small steps in the workplace, domestically and elsewhere.

“It’s not necessarily the same person who is going to help you, but somebody else will help you,” Sharma said. “Small things matter. So, start with family. … We are all equal. Have a mindset that women are not weak.”

Added Sharma: “If you say, ‘Hey, you’re beautiful,’ after a few days, that person will tell you the same thing. Instead of talking all the time, try to give. If you compliment others, if you support others no matter what, if it’s a small hand — it doesn’t matter, that will come back to you in a different way.”