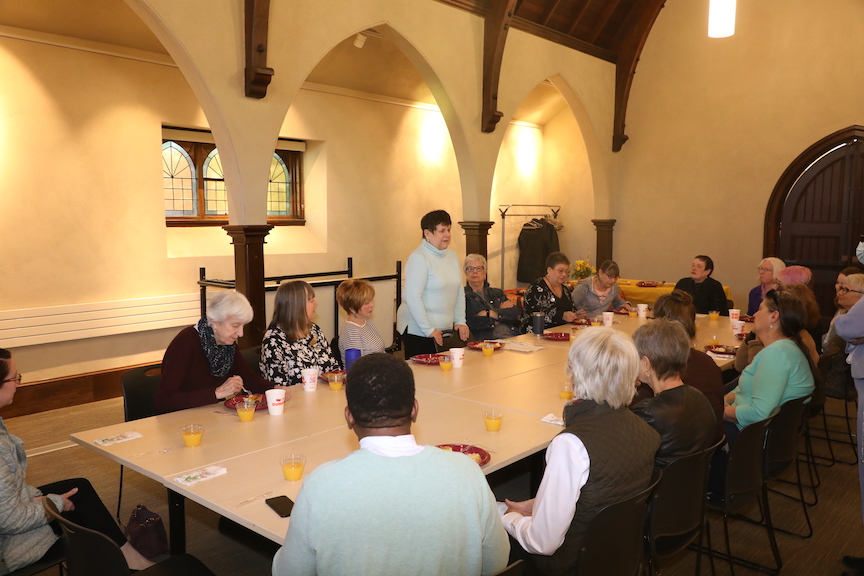 Friends of the Hopkinton Public Library’s appreciation breakfast on April 5 was designed to serve multiple purposes.

The first was to ensure that library employees know they are valued.

“We’re very conscious of what a great staff we have,” said Friends board member Barbara Champney. “Not only are we aware of their professionalism, we’re aware of the fact that they do things with individuals who come in — maybe somebody who has lost a spouse — they give special attention to people who have pressing needs.”

The breakfast also served as an opportunity to update library staff on how the Friends organization has changed in the past few years, since the library expansion project was completed in 2017. Champney noted that the group now has members ranging in ages from 30 to their 80s and with a variety of professional skills.

“It’s become very active and very proactive,” Champney said. “So we discussed some of the new programs and what we wanted to do in the future. … What we hope to focus on is making efforts for professional development for the staff, for individuals in particular. We also are interested in making sure that when the town thinks about Hopkinton, they think [Boston] Marathon, schools and what a great library. So, we’re trying to get people more aware of the resources of the library.”

Among those resources are a program for English language learners, memory kits, pop-up book sales, a mural up the stairs leading to the Children’s Room and adventure passes — “Those are very popular, especially right before vacation,” Champney said. Friends also is looking into arranging a Chinese acrobat performance for children and offering free online courses to the community.

“We’re just thinking outside the box, hopefully, and trying to reach people who have not been a part of the library before,” Champney said, adding: “The way that Friends has changed reflects the change in the library. Because the library, the first couple of years of the change was just getting their feet on the ground. But now I think there’s this stage where being creative and stepping out is what the library is going to be about.”

The Hopkinton Center for the Arts is hosting a special program April 29-30 with a presentation of Project Empathy, which was created by Hopkinton’s Catherine Cote.

Cote, who grew up participating in Enter Stage Left Theater programs at the HCA, found inspiration for the project when as a Holy Cross college student in 2017 she headed to Australia for six months, excited to immerse herself in a different culture.

“Although I was meeting literally hundreds of people per week, our conversations were surface level and focused on the quirky differences we were encountering,” Cote explained, via the HCA’s Sandee Buckley. “I longed for the deeper connections I had with friends and family back home.

“Simultaneously, the U.S. was more politically and socially divided than I had experienced in my lifetime. ​I couldn’t help but think how things would be different if we all just listened to each other.”

Cole came up with an idea. Six people would share a true, life-changing moment. They then would be paired up and put in a position to share the other person’s story — forcing them to establish a connection and show empathy.

“I continually ask myself, ‘What can we, as an arts center, do to let people know that the HCA is a place where everyone is welcome, heard and celebrated?” said Grill, the HCA’s executive director. “Catherine’s passion project was no surprise to me as she has always been insightful and wise beyond her years. If anyone could come up with a way to allow people to deeply connect and listen to each other, it would be Catherine.”

There will be a talkback with the audience after each of the two performances.

Tickets for the show, recommended for ages 14 and older, are available at hopartscenter.org.

More information on Project Empathy can be found at officialprojectempathy.com.

Congratulations to former Hopkinton resident Veronica Burton, who was the seventh overall selection by the Dallas Wings in the Women’s National Basketball Association draft on April 11.

Burton, who moved to Newton as a youngster, is the daughter of longtime WBZ-TV sportscaster Steve Burton. Like her father — and mother, Ginni, and grandfather, Patriots legend Ron Burton — she was a standout athlete at Northwestern University. The 5-foot-9 point guard was a three-time Big Ten Defensive Player of the Year, the 2022 Women’s Basketball Coaches Association National Defensive Player of the Year and a third-team All-American.

“This is a surreal moment, honestly” she said at a post-draft press conference. “These are the moments that you dream about as a young girl. To just see the hard work finally pay off, it’s just an unmatched feeling.”