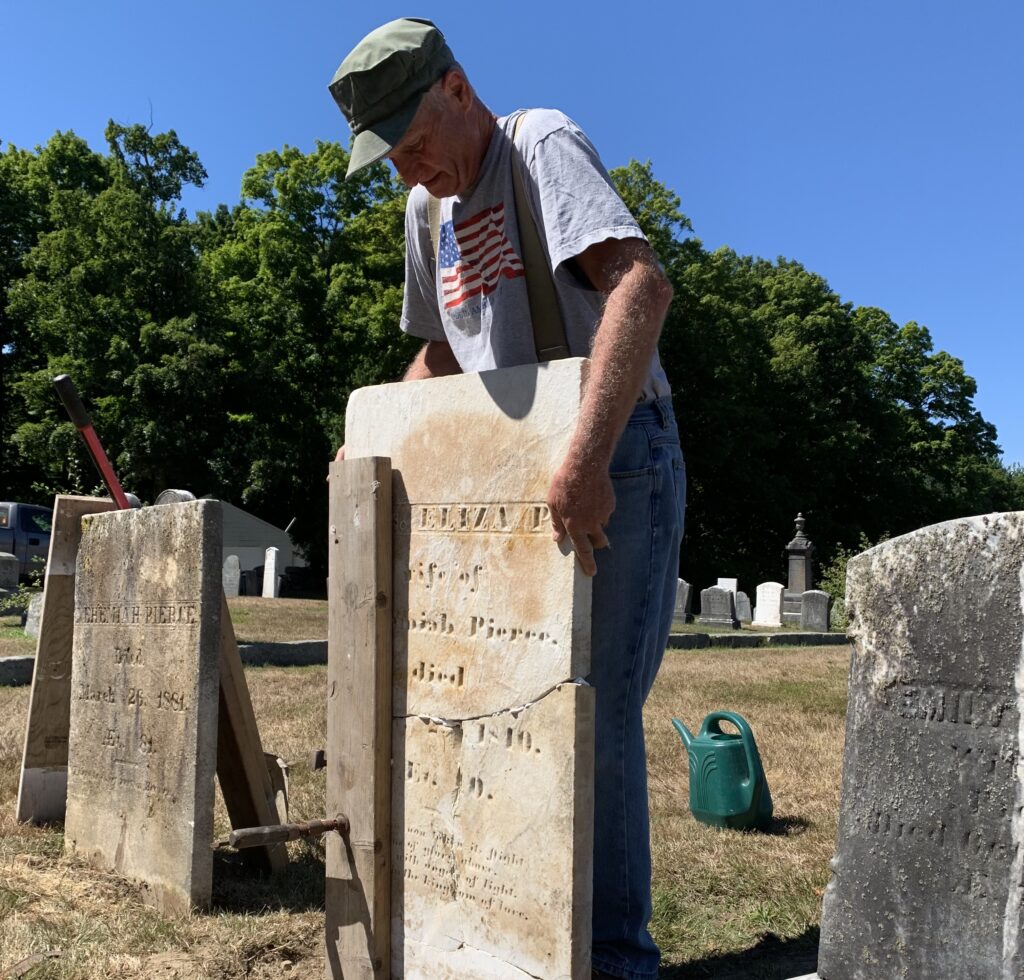 Mike Whalen’s goal is simple: “Fixing the cemeteries one stone at a time,” he said.

A longtime volunteer and member of veterans committees in town, Whalen has been mending broken and crooked headstones at the town’s cemeteries for some time.

As American Legion Post 202 adjutant, Whalen oversees the placing of American flags at the graves of veterans in town.

“Every once in a while I’d take a drive through the cemeteries looking to see if there were any flags broken or blown away, and I’d fix them,” he said. “One day a few years ago I was doing that [at Mount Auburn Cemetery] and an elderly couple saw me. Their car had out-of-state plates. They had been doing some family research, and they were looking for a grave of a relative. I said, ‘Yeah, I think I know where that grave is.’

“I walked them over, and the stone was knocked over, broken in half. You can imagine how disappointed they were to see that. I could see the look on their faces. The particular grave of their long-lost relative was really in bad shape. It was very disappointing. It just kind of made me realize this was kind of a sign for me to do something about this.”

Having worked as a stone mason “most of my adult life,” Whalen was the right person in the right place at the right time. He started fixing markers and headstones and has not stopped since.

Whalen noted that the town also hired another individual to fix stones at Mount Auburn Cemetery, but “there’s still quite a bit left to do” at Mount Auburn as well as other cemeteries in town, he shared.

He said the town has offered on multiple occasions to compensate him for his work, but he notes that the cost of the items he needs — what he doesn’t already own — is negligible, and he is happy to do the work on his own dime.

“It’s very rewarding to take something that was completely destroyed and put it back together the best I can and have it upright again, like it should be,” he said.

Whalen performs a variety of fixes. Sometimes it’s as simple as digging a new hole and straightening out a headstone. Other times it’s applying a special solution to make the stone carvings readable. For the markers that are heavily damaged, it could mean taking them to his workshop and doing a more extensive repair job.

Whalen has given special attention to the Wilson Street Cemetery, a small cemetery owned by St. John the Evangelist Church that had fallen into disrepair before Whalen and some local Scouts took on the challenge of restoring it in recent years.

That cemetery features the grave of Thomas Fetherston, a 19-year-old from Hopkinton who died fighting in the Battle of Gettysburg during the Civil War. His headstone was in rough shape before Whalen went to work on it.

“It had broken many years ago in several pieces,” Whalen explained. “At the time, whoever was in charge of that cemetery decided to just leave it in the ground all broken up and then poured concrete all around the perimeter of it and left it like that. So I had to dig it up and chip off all the concrete and put it back together.

“Back when the thing first broke, probably 1880 or something, they didn’t have the kind of adhesives and glues and stuff that we have now. They did the best they could with what materials were available.”

Whalen also replaced a faded wooden cross with an engraved stone monument dedicated to unknown soldiers after consulting with Anne Mattina, who had done some research on the cemetery and the people buried there.

Whalen did not stay in touch with the visiting couple who inspired his project, but he hasn’t forgotten that meeting.

“During the good weather times if I can just fix one stone a week, I feel like I’ve accomplished something.” 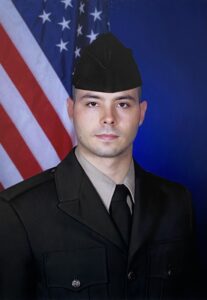 Salute to Devontae Rivera, who graduated from U.S. Army basic training at Fort Leonard Wood in Missouri on Aug. 11. His proud parents report that as an active duty soldier, Rivera will serve as a 13F joint fire support specialist, gathering intelligence and enemy target location to help the Army determine where and how to deploy artillery in mission-based situations.

An Eagle Scout, Rivera has a B.S. in physics from UMass Amherst.

Shared his father, Felix: “His family wishes him well on safe journeys and are proud of their son’s service to our great nation.”

The official NFAA review of the book praises it for “page after page of inspiration and self-discovery meant to transform from deep inside … then outward.”

“Baskin writes with infectious sincerity, passion and earnestness,” the review reads. “Her expressions jump off the page, drawing the reader into her circle and giving them the almost-experience of being in the same room with her. Personal reflections, creative self-care techniques [and] carefully chosen affirmations are shared generously. Thoughtful questions, journal prompts and activities (called the ‘Look Within’ process) are sprinkled throughout to help readers navigate their own private battles, as well as contribute to the larger mission of creating “one global community of love” even in the face of a chaotic world scene. ‘Peace Dreamer’ will make you pause, take deep breaths, meditate, feel and heal. Even better, it will help you to help others do the same. What a breathtakingly special book!”