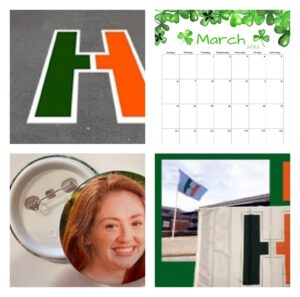 Among the fundraisers for the Hopkinton High School senior class are (clockwise from top left) Hillers logo driveway painting, a daily raffle through March, Hillers logo flags and photo buttons.

After a couple of years of masks and social distancing, the Class of 2022 at Hopkinton High School is looking forward to a somewhat normal final three months of its senior year.

Normally prom is only held for the junior class, but because the current seniors missed out last spring, they were able to schedule an event May 13 at Lake Pearl in Wrentham — although it wasn’t easy.

“Immediately after it got canceled we just started to look for a different date the year after, because we knew that it wasn’t going to be possible to do it that year,” said Manoli Barris, president of the senior class. There’s other schools looking for two proms [junior and senior] this year, and then, put aside proms, there’s people looking for weddings, and our date is kind of a prime date. So it was tough, but we were able to get a pretty good date. And the nice part about ours is it’s after the AP tests. So that’s kind of nice for the seniors, who, generally speaking, are taking more APs than the juniors.”

The schedule remains fluid — earlier this month it was decided that there would be no grand march before the prom, and the post-prom event was scaled down — but most of the traditional activities are slated to resume.

“It’s nice that we’re able to start to get back to normal,” Barris said. “Of course, we don’t know if we’re going to have to wear masks at prom or on the boat cruise and stuff like that, but it is really nice to start to get a little bit of normality. Obviously it’s been crazy. The past few years it’s like every class has been getting — for lack of better words — screwed over. But I’m glad that we’re starting to get better.”

Among the other events on the calendar, there will be a 50 Days to Graduation Dinner on April 14 for seniors in the HHS cafeteria. Senior Project begins April 25 for those who are interested in participating, with the presentation slated for May 23. The final day of classes for seniors is May 25, which also is the day they will receive their yearbooks. That evening, seniors and family members will head to Gillette Stadium in Foxboro for the Senior Dinner Dance. Senior Recognition Night is the following night, May 26. The class will attend a Red Sox game together on May 31. The Senior Boat Cruise in Boston is June 1. Graduation is outside at the football field on June 3, and the graduation car parade will be the morning of June 4.

In addition to Barris, class officers include Sarah Furlong (vice president), Luciano Duca (treasurer) and An-Wen Huang (secretary). The seniors also have received help from a number of parents as well as class advisors Samantha Breen and Jay Golden (who took over for Renee Hilbrunner when she went on maternity leave).

The class is running a few fundraisers to help fund the events. There is a daily calendar draw throughout the month of March. The deadline to purchase a $10 ticket is Feb. 28. There are Hillers logo flags on sale for $30. For $35 ($50 after March 1), residents can have a 3-foot Hillers logo painted on their driveway. The class also is selling customized photo buttons for $4. (For more information on any of these fundraisers — or to make a donation — visit hopsenior2022.com/fundraisers or email HHS2022info@gmail.com.)

“There’s a lot of fundraising that goes on, whether it be the parents for the post-prom or the prom committee for the school,” Barris explained. “The tough part is not overlapping on fundraisers. I know the parents of both the after-prom committees for the seniors and the juniors, they were struggling, because they’re both looking for money and sponsors, and obviously it’s tough for businesses to give the same sponsorship to both classes. So that is a little bit of a hiccup, but it’s working out.

“We weren’t able to collect class dues for two years, so that was a big negative,” Barris added. “So we’re trying to do as many fundraisers as we can and ramp everything up so that we’re going to be able to get past this year, people won’t have to buy super-expensive prom tickets, and we also want to make sure that we have some money left over for our class gift and our future reunions.”

Supporters of Hopkinton’s Greyhound Friends dog adoption shelter on Saddle Hill Road showed their love for the resident dogs by sponsoring bright valentines hearts to be hung around the kennel area. Running through Valentine’s Day, the fundraiser generated some enthusiastic support.

“It’s so nice to know people are sending love to the dogs,” said Executive Director Terri Shepard. “Walking through the kennel, you can’t miss all the bright pink and every heart means someone cares about the dogs who are waiting for homes. Of course it’s the staff and volunteers who feel cheered by the outpouring of support, but whenever we come to hang more hearts, the dogs seem to know something good is happening.”