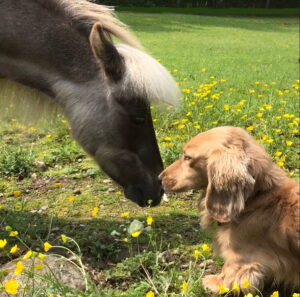 This miniature horse is one of the farm animals that will be on hand at a Pond Street fundraiser for Ukraine on April 30.

Like many people, Margaret Bower has been following the reports out of Ukraine, where neighboring Russia has embarked on a campaign to destroy much of the nation.

Unlike most people, Bower decided she wanted to get personally involved.

A retired FBI agent who was a bomb technician for almost 25 years, Bower started researching opportunities to volunteer her services in or around the war-torn country.

“I’m used to being a first responder when catastrophes happen,” she said. “I’m used to showing up. It’s just in my DNA.”

Aside from taking up arms and joining the fighting, Bower found the volunteer options limited.

“I researched it, but it was really hard to find anything,” she said. “Then I found something in Croatia [about 250 miles to the west of Ukraine]. I was accepted to be a driver [for fleeing refugees], because that’s what they need the most.”

However, when Bower explained her plan to her husband, it was not well received.

“He strongly objected,” Bower said. “He said, ‘There’s a war, there’s a pandemic, and you might not come back.’ My husband’s first wife died of cancer. I couldn’t do that to him.”

So, Bower looked for ways she could help locally. She researched charitable organizations and found a highly rated one called Direct Relief, which had started a Ukraine-specific fund, mainly providing emergency medical relief.

Owner of a farm at 199 Pond Street, Bower decided she would host a benefit featuring her farm animals — including a miniature horse, a full-sized horse and chickens — along with kids games, an art sale and a bake sale. There also will be live music from Joel Kahn, Shell Theory and Blonde Dog, all of whom are donating their time.

Within a week of Bower posting the information in late March, more than $1,500 in donations poured in via her fundraising webpage (mightycause.com/story/Sisbgg). The Hopkinton Women’s Club offered to donate baked goods, art and volunteer hours.

“It’s been a huge reaction and I’m really happy about that,” Bower said. “A lot of people are baking stuff and dropping if off. And I reached out to the high school, they posted it and immediately we got about 25 kids reaching out offering to help. This town is so great like that.”

Two years ago, then-Hopkinton High School student Aditya Dutta was organizing a supercar exposition to be held in town, featuring a number of exclusive cars. The pandemic forced the event to be canceled.

Now a freshman at the University of Michigan, Dutta is giving it another try. He has partnered with Aston Martin Boston and will hold the show at the company’s Norwood location on May 15 from 9 a.m.-noon. Dutta refers to the event as “a dream brought to life in the form of an automotive exposition of the highest quality.”

Proceeds will be donated to the Jimmy Fund for cancer research. For more information, visit hopkintonconcours.wixsite.com/carshow.

The Hopkinton Center for the Arts is hosting a free exhibition titled “Coverage: The Boston Marathon As Reported By The Boston Globe” until April 23 at the Lotvin Family Gallery.

The exhibition includes a collection of curated Boston Marathon images through the lens of The Boston Globe, now celebrating its 150th year of publication.

The HCA also is hosting a conversation with Boston Globe sportswriters on Tuesday, April 12, from 6:30-8 p.m. The panel discussion, led by sports editor Matt Pepin and longtime writer John Powers, will share how Boston’s oldest newspaper has reported on the world’s oldest marathon over the years. The event is free, although attendees are asked to RSVP, which can be done via the HCA website (hopartscenter.org).

The Hopkinton Trails Club’s monthly volunteer day on March 5 focused on removing the invasive plants from the meadow of the Whitehall Conservation area. The Open Space Preservation Committee, which has worked on this project for some time, offered thanks to the volunteers, including Chuck Dauchy from Hopkinton Area Land Trust for providing the technical direction, Nate Eckman, Morrie Gasser, Peter LaGoy, Ken Parker, Linda Chuss, Michelle Hamlin, Mike Boelsen, Gary Trendel, Mike Reilly and some scouts from Troop 4. ….

The Friends of Whitehall organization is seeking people to help with its annual spring cleanup, which is scheduled for Saturday, April 23, from 9 a.m.-noon. Participants will gather at the boat landing parking at Whitehall State Park on Wood Street and be assigned areas of trail and shoreline to clean. “This is a wonderful opportunity to help your community, and we hope you will join us,” the organization wrote in its press release. The Friends of Whitehall group also is looking for members to join the nonprofit organization, and membership is open to anyone, whether or not they live on or near the lake. Visit friendsofwhitehall.org for more information.