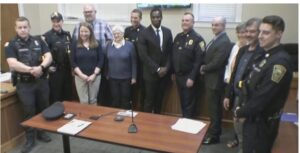 Dennis got his undergraduate degree from the University of Massachusetts, where he played football for the Minutemen. He earned a B.A. in legal studies with a minor in sociology. He then received a master’s degree from Lasell University in homeland security.

Dennis, who hails from Worcester, worked as a public safety officer for UMass Medical School for just under a year and then for the state since 2020.

Asked why he applied to Hopkinton, Dennis said he was impressed with how much the department interacts with the residents.

Added Dennis: “Based on today’s social climate, there’s a perception of law enforcement, and I believe that this department represents what other departments should be doing more, engaging with the community and building a rapport with the Police Department and the community at large.”

McKeon has a B.A. in sociology from Assumption. He worked alongside Dennis at UMass Medical School, where he has been employed since 2018.

Asked about how he manages his own mental health, McKeon said: “Keeping a high level of physical fitness goes a long way towards mitigating the stress that I feel. With regards to if I go through a difficult call, a lot of times it’s just helpful to talk it out with a supervisor or somebody who was with me on the call.”

The board also approved the hiring of Susan Schuler as administrative assistant for the Police Department.

Town Manager Norman Khumalo said the town learned from her references that she is a collaborator and hard worker as well as “kind, caring, compassionate and professional at all times.”

“If you’re looking for the professional definition of reliability and steadiness, Susan represents that,” Khumalo added.

Schuler, who most recently worked as an office manager at Brophy Elementary School in Framingham, said she has lived in town for 18 years and was happy to find a position in her town.

“This is a great spot for me,” she said. “It was a decision that I made with my family and it’s something that’s really going to work well for us, having me here in our community, putting my skills to work in our community. I want to be here, and I hope I’m here for a long time.”

During public comment, resident Darlene Hayes appeared before the board and shared that she started an online petition to address the traffic situation at West Main Street in front of Cumberland Farms, the site of frequent accidents. She said the petition received 568 signers in three days.

Nancy Richards Cavanaugh also commented about the safety issue, saying, “I urge you to consider what we can do as a town.” Fellow resident Sean Kimball added his voice, saying his wife recently was in an accident at the location.

Later in the meeting, Town Manager Norman Khumalo said Cumberland Farms is installing new signage, and the town has engaged an engineering firm to determine what improvements might be implemented.

However, Khumalo said Cumberland Farms has opposed installation of a no left turn sign because it would negatively affect the business.

“We’re not an opposition group, we’re an advocacy group. … This is a matter of safety, and we want to do the right thing,” Knous said.

Knous requested a pause on the request for funding at Town Meeting for the segment that runs behind Marathon School.

At the start of Tuesday’s meeting, Tim Kilduff introduced Costa Sideridis, who is president of the Alpha Omega Council in Boston. Kilduff showed off the gilded wreaths from Greece that will be presented to the Boston Marathon winners and organized a ceremony in which the Select Board presented the wreaths to Sideridis. …

The board confirmed the appointments of Katie Duval to the Cultural Council, Jennifer Donahue to the Veterans Celebration Committee and eighth-grader Josh Jones to the Youth Commission as middle school representative. …

The board accepted the resignation of Cynthia Esthimer from the Lake Maspenock Weed Management and Control Advisory Group. She had served since 2016. …

The Select Board accepted a donation of $3,100 from the estate of Henry Welzel to the Trail Coordination and Management Committee in memory of Jane Welzel.