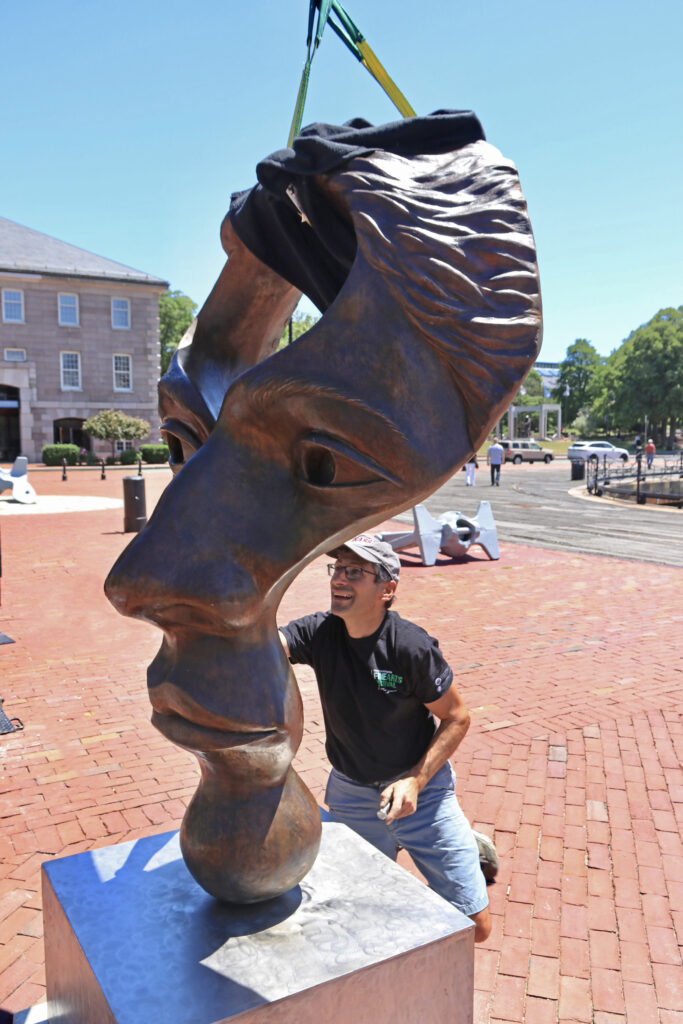 Michael Alfano supervises as his “Questioning Mind” sculpture is lowered into place along the Boston Harborwalk for his exhibit titled “Of Many Minds.”

If you’ve been to the Town Common, you likely are familiar with one of Michael Alfano’s sculptures, as his statue of George Brown firing the Boston Marathon starting pistol sits on the park’s northeast corner and has become a local landmark since its debut in 2008.

Alfano, an award-winning artist who lives in town, has plenty of other impressive pieces. Many of them will be on display over the next 18 months as part of his exhibit titled “Of Many Minds” at the Boston Harborwalk. The display starts at the USS Constitution Museum at the Charlestown Navy Yard and stretches for more than a mile along the Harborwalk, with the Boston skyline as a backdrop.

A total of 20 large-scale pieces are being featured in the solo exhibit.

“Each of the pieces are very philosophical and accompanied by sort of a philosophical quote that kind of talks about our relationships in the world with different things that we go through, particularly questioning minds, always thinking and questioning things and how to do things better,” Alfano said.

One of Alfano’s pieces, titled “Liquid Sunshine,” depicts yellow paint pouring out of a paint can and forming a human face before it hits the ground.

It represents “pouring your creativity out into the world,” Alfano explained. “It goes with the quote, ‘Turn towards the sun and all shadows will fall behind you.’ ”

The exhibit features some old and new pieces. One of the new sculptures is called “Anthropocene.” “It’s a female figure looking up in somewhat of an abstract way,” Alfano said. “She has realistic feet and a head and then this abstract body that almost creates a plant trellis. The whole piece talks about our relationship with the earth and being a part of the earth — the oneness of humanity and nature.”

Alfano said the Navy Yard Garden & Arts organization reached out to him after seeing his work at other exhibits, and he’s been hard at work preparing ever since.

“It’s been about seven months of very intense efforts to both get it approved by downtown Boston and the powers that be as well as doing all the logistical stuff and actually making the sculptures and getting them installed there.”

Alfano traditionally sculpts in clay, makes a mold and then casts into bronze and other materials. It generally takes him about 1-2 years to make a large-scale sculpture. He has displayed his work in major shows around the country.

“This is my largest solo exhibit in terms of space and large-scale pieces,” he said. “It’s in downtown Boston and comprising over a mile-long walkway of sculptures, so that’s quite ambitious.”

The exhibit is free and open to the public through December 2023. An opening celebration was held June 21. For more information, visit navyyardgarden.org/events.

Luke Scanlon and Nick Dieter, who both just finished their junior years at Hopkinton High School, want to help with your barbecues.

The pair have started a grill cleaning business, with a percentage of profits being donated to the Mental Health Collaborative.

“Cleaning a grill adds years of life to your grill, and it looks good,” Scanlon said.

Scanlon said he was sitting around with his father tossing around ideas on services he could provide residents when they came up with grill cleaning.

“I love to grill,” Scanlon said. “[The idea] started because I would burn a lot of my food on the grill because of hot spots and grease fires.”

Scanlon’s father, Jim, put Luke in touch with a woman on Cape Cod who has experience in the field, and she provided some key guidance.

Scanlon and Dieter cleaned six grills in their first month and had a few more appointments lined up for late June. The teens remove parts of the grill, soak them in chemicals and power wash them.

“The process itself is pretty straightforward,” Scanlon said. “We’ve come across some pretty gross grills, some 20-year-old Webers. Not everything comes off. There’s going to be some 10-year-old rust and black spots, but we make it look as good as we can.”

Based on a suggestion from Dieter’s mother, the boys decided to donate 10 percent of their gross profits to the Hopkinton-based Mental Health Collaborative.

“Especially with COVID and everything, it’s a great way to give back to people who need it and reduce stigma associated with mental well-being, like anxiety and depression,” Scanlon said. “That’s something that’s very important to me and a lot of people. At the end of the summer we’ll hopefully make a pretty sizable donation.”

Congratulations to Hopkinton teenager Hunter Gould, who recorded a perfect composite score of 36 on the ACT, a curriculum-based achievement exam that measures what students have learned in school. Making his achievement even more interesting is the fact that Gould has been studying via an online school (Pearson Online Academy).