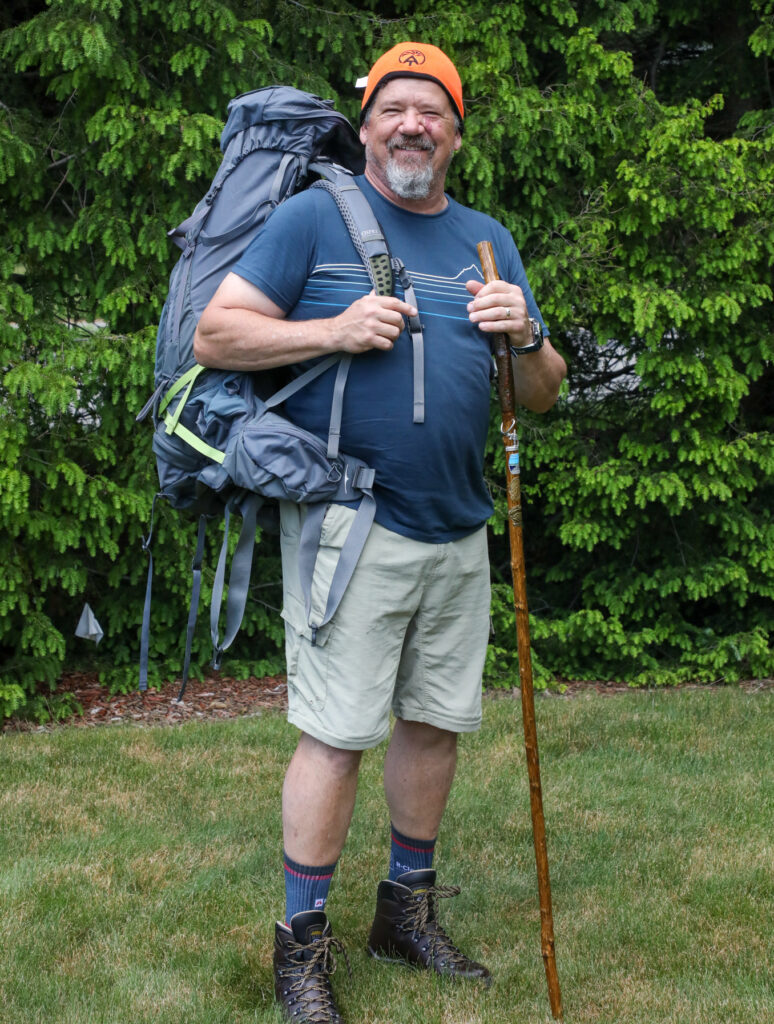 Tom Dawson loves the outdoors, and he’s putting that love to the test this year when the longtime Hopkinton resident embarks on a hike of the entire Appalachian Trail — all 2,193 miles, from Maine to Georgia.

“Doing the whole AT is something I’ve had as a goal for my whole life,” Dawson says. “I decided to do it as COVID hit and it made us all introspect a little more. COVID made us all realize we have to go after those dreams. They’re not going to happen on their own. So I planned it in 2020 to do this year.”

After he shared his idea with his two older siblings, his brother immediately asked to join the journey. The pair have run some 100-mile ultramarathons together, so endurance tests are not new to them. “We’re not strangers to pain and suffering,” Dawson jokes. “I guess we’re masochists.”

Dawson, 60, and his 68-year-old brother plan to leave from Maine’s Mount Katahdin on July 12. Their goal is to get to Springer Mountain in Georgia by Christmas, some six months later.

“The main thing I’m looking forward to is life without time restrictions and limits,” says Dawson, who will take a break from his job as an architect. “Just experience it and not worry about the time. We’re all so busy, with so many things and our phones. I’m really looking forward to unplugging.”

Dawson, who comes from a family of Eagle Scouts — he was Scoutmaster of Hopkinton’s Troop 4 from 2008-12 — is an experienced backpacker, mountain biker and kayaker. “I’ve always loved the outdoors,” the Virginia native says.

While most hikers start in the south and head north, Dawson elected to go the opposite way, in part to avoid the heaviest crowds.

“There’s competition for campsites and shelter space and resources in the towns for months,” he says. “We wanted to avoid that. Statistically, more serious hikers go north to south. And also statistically, there’s a better success rate going north to south. It’s a little more difficult, as a lot of the harder sections of the AT are in the northern corridor. That is one detriment to going that direction. If you come from the south you’re in a lot better shape when you hit that.”

Dawson has been doing short, fast hikes around Lake Whitehall, near his home, in preparation.

“My brother and I are going to be starting slow, because we’re older,” he says. “We’re going to do maybe 5-6 miles a day to start and acclimate. You don’t go into it doing 20 miles a day, especially in the northern sections. You work up to it. Through-hikers [anyone who hikes the entire trail in one calendar year] have what’s called zero days, where you take off a day for rest. They may be more frequent in the first few weeks and months. We’re not going for any age or speed records. That’s not what we’re interested in. We’re going to enjoy it.”

There are three-sided, log-hut shelters along the trail, and the brothers occasionally will leave the trail to recharge in a nearby “trail town” — returning to the same spot so that they complete the entire route.

The Dawsons will carry ultralight materials in their backpacks, including a tent, blow-up mattress, pillow, quilt and water filter so they can drink from wildlife sources. They will have family members send packages to be held at post offices in trail towns with food and more robust gear to wear when they hit wintry weather in the southern mountains.

They also will take their phones and a GPS communication device that will broadcast their location.

Their daily plan is to have an early breakfast, hike from about 8 a.m. until 4 p.m. — possibly longer in the summer months where there’s more daylight — then set up camp, eat a relaxed dinner and get some sleep.

“Basically your job is to walk all day, as long as you can, then sleep, get up and repeat,” Dawson says.

He credits his wife of 33 years with not only supporting his undertaking but being a self-reliant, independent individual, making him more comfortable spending so much time apart. “My daughter’s more concerned that our golden retriever will get supremely depressed,” Dawson says with a chuckle.

As the trip gets closer, Dawson has been continuing to walk every day, including fast hikes of about 6-8 miles. He’s confident he will be in the right physical and mental state to accomplish his goal.

“I’ve been dialed in to this for years,” he says. “My lifelong dream is to just start at one end and walk to the other end. It will be a dream for me to say that I’ve done it.”