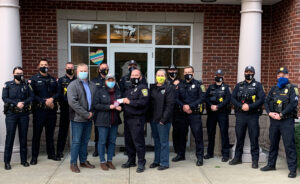 Officer Phil Powers, president of the Hopkinton Police Association, presents Diane Kelley with a check and a pink police patch during a ceremony outside the station on Dec. 2. PHOTO/HOPKINTON POLICE DEPARTMENT FACEBOOK

When Diane Kelley learned she had breast cancer in 2018, she chose not to share the news outside her immediate circle. This fall, when it resurfaced, she elected to take a different approach.

“The first time I went through cancer — I’m a pretty private person — I didn’t let it out there. Family and friends knew,” she said. “When you go through this a second time, in some ways I don’t care who knows. I want people to know that it’s important to get screened, to get checked. Nobody wants to go through this.”

Earlier this month, Kelley was recognized by the Hopkinton Police Association, which presented her with a check as part of its annual Breast Cancer Awareness donation.

“When this opportunity arose with the Police Department and they were kind to offer this donation, I thought now is the opportunity to speak up,” Kelley said.

A longtime Hopkinton resident, Kelley said she is concerned that women are putting off mammograms — which is how she first learned she had cancer — due to the pandemic. That could lead to bigger problems, as the earlier the cancer is detected, the better chance there is to fight it.

“If I can get one person to read this article or look at the [police] Facebook page and go, ‘Oh, wow, I am overdue to get my mammogram,’ then it will be well worth it,” she said.

Kelley learned of her second diagnosis in September. In October, which is Breast Cancer Awareness Month, members of the Hopkinton Police Association grew beards and sold pink police patches as part of their annual fundraiser. Some of the money raised is donated to charity, and the rest goes to an individual who is fighting breast cancer.

“I’m not exactly sure how I’m going to use it, but I’m thinking maybe post-pandemic and post-treatment maybe there’s a little trip in my future — some sort of respite,” Kelley said.

For now, travel is not a consideration. In fact, she said she rarely leaves her house other than to go to Boston’s Beth Israel Deaconess Medical Center for consultations and treatment — which she is forced to do alone due to the pandemic.

Kelley said it has helped that she has experience going through treatment.

“Having gone through cancer once, I at least have some semblance of what’s going to happen,” she said. “I don’t know how to explain that, but to go through it and know that it’s a scary thing — and you’re often times going through these things on your own because they can’t afford to have people in the hospital with all these COVID cases.”

Kelley, a mother of three, said it also helps to live in such a close-knit and supportive town.

“I have to say the community’s been great,” she said. “I’ve been in a book club in town since my oldest was a toddler. There’s like 10 women from Hopkinton and they have been phenomenal. My neighbors have been phenomenal. This community is wonderful like that. I have nothing but gratitude for friends, community, family. And this police donation — I can’t speak enough about how supportive people have been in trying to help in any way possible.”

“Because I have two rescue dogs I decided to do it on animal rescue,” she said. “So I was looking at articles and different documentaries. As I was researching I decided I wanted to take it to the next step and do something to help. My mom helped me come up with the idea of baking dog treats.” 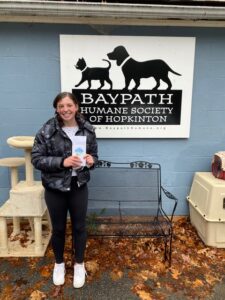 Calderwood found recipes online, tested them at home on her three dogs (the two mixed rescues and a goldendoodle), and eventually settled on one of peanut butter and another of cheese. She called them “Winnie’s Treats” and pushed out the information to friends and family and on social media. It quickly took off.

“It ended up spreading way more than I thought it would, and I was able to raise $1,000,” she said. “All my customers would send me pictures of their dogs and said they were obsessed.”

Calderwood then did some more research and decided that Baypath Humane Society would be the organization that would benefit from her successful venture.

“It seemed like a really good rescue place to donate to, so I contacted them and I was able to meet them and talk about what they were going to do with the money,” she said. “And I’ve stayed in contact with them. My next step is I’m going to make dog blankets. I’ve already said any extra I have that I don’t sell I’ll donate to them, and hopefully I’ll make some money to donate as well.”

Calderwood said she also hopes to create another round of the dog treats, but because that’s very time-consuming she’ll likely wait until she’s less busy with school.

Hopkinton resident Bob Dobinski’s company, Corp-Events New England — which was featured in the Independent back in April when it transformed the Boston Convention and Exposition Center into a COVID-19 field hospital — was called back into action last month. This time the company turned the DCU Center in Worcester into a COVID-19 treatment center.

Working on short notice, the crew, featuring a labor force from Teamsters Local 25, quickly constructed partitions and created treatment areas that will be supervised by a team from UMass Memorial Medical Center.

Corp-Events New England normally focuses on installing and dismantling facilities for trade shows, but that industry has been stalled due to the pandemic.

“We are proud that there are people ready to step forward and serve at a moment’s notice,” Dobinski said.