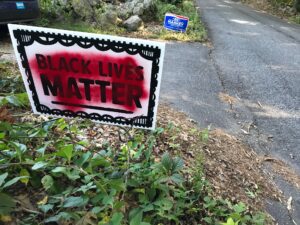 This Black Lives Matter sign was defaced on Sept. 19. A previous sign in front of the same home also was vandalized.

We might be a society that is driven by social media, but an old-fashioned method of communication has seen a surge in popularity this year.

Yard signs are all over town. There are signs celebrating graduates of high school, middle school and even preschool. There are signs declaring Black Lives Matter, Science Is Real, All Are Welcome, Defund the Police and Defend the Police. There are signs that pay tribute to first responders, medical personnel and other pandemic heroes. There are signs designed to lighten the mood, such as the Monty Python-themed “Ministry of Silly Walks” signs. And of course there are political signs, encouraging voters to support a specific candidate or, as one sign suggests, “Any Functioning Adult 2020.”

For the record, Hopkinton has restrictions on the amount of signs and length of time they can be displayed.

According to the town’s bylaw (Chapter 210-179), no more than two temporary signs — including banners — may be displayed on a lot. There are two exceptions, as there is no limit to the number of signs that can be displayed within 30 days of an election as well as Patriots’ Day (Boston Marathon). A sign can only be displayed for 30 days, although apparently there is nothing to prevent a resident from removing a sign for a couple of days and then returning it to the property for a new 30-day period.

One thing is clear: It is not legal to steal or vandalize someone’s sign. And that’s been a problem.

During the public comment portion of the Sept. 15 Select Board meeting, member Amy Ritterbusch expressed disappointment with signs being taken from residents’ yards, as well as signs being placed on lawns without consent. She said she lives on a main road and has experienced both issues during her 16 years in town.

“This discord in town doesn’t further anyone’s cause,” she said. “I urge people to stop taking signs. Tensions are high and it’s really not funny. If you disagree with someone there’s plenty of other things you can do. You can do something positive for your own cause [or] you can have a conversation.”

In a followup interview last week, Ritterbusch said she’s still hearing a steady stream of people complaining that their signs are being stolen or damaged.

Resident Linda Chuss said she has had two Black Lives Matter signs vandalized. In July she found her first sign down the street, off the side of the road, with a racial slur and obscenity written on it.

Then on Sept. 19 another Black Lives Matter sign in front of her house was defaced with red spray paint. A second sign supporting Ed Markey for U.S. Senate was left alone.

“They didn’t touch the political sign, so it was definitely targeted at the BLM sign,” she said. “I did report it to the police. They were really great, they came out and talked to me about it and we talked about things I might do to help prevent it in the future or help find the people.”

Taking a suggestion she saw on Facebook, Chuss put out the original sign (which she had cleaned off) with a note that read something to the effect of, “I don’t know what you’re trying to accomplish, but if you steal this sign we’re just going to donate money to BLM to get another one, so it’s not really perhaps helping your cause, whatever the cause is.”

Chuss said she doesn’t feel personally targeted, that it likely has more to do with the fact that her home is set back from the road, making it harder to monitor the signs. And much about the vandalism doesn’t make sense, such as why the vandal(s) would write on the first sign but then throw it down the street where it might not have been noticed.

Chuss said people have been very supportive since she posted on social media about the vandalism, and she’s heard that other people have had similar issues.

“One person talked about how political signs or issue signs like this can really get people’s emotions up,” Chuss said. “And I think that’s really true. She said, ‘When I see certain political signs they make me really angry.’ We need to consider that there is an emotion that these signs can raise in people who already have a strong opinion against that issue or that person.”

The Hopkinton Moms Group is running a Breast Cancer Awareness fundraiser for the month of October for its members. Hop Mom and digital designer Sarah Navin designed a logo that was printed a bright pink tumbler. Proceeds will go to the Dana-Farber Young and Strong Program for Young Women with Breast Cancer.