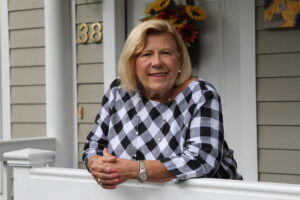 Loyal. Enthusiastic. Dedicated. These are just a few words members of the Hopkinton Women’s Club use to describe Marie Smith. And it’s because of her loyalty, enthusiasm and dedication that Smith was recently named the General Federation of Women’s Club of Massachusetts Clubwoman of the Year.

The award is given to a standout Massachusetts clubwoman who has gone above and beyond for her club, furthering its goals, taking on leadership roles and promoting the club and its activities.

“It was quite a surprise,” Smith said. “I got this phone call that registered GFWC and I thought, ‘Why are they calling me now?’ When I was told I’d received the award, I was baffled. I didn’t know what to say. I never expected this.”

Smith may never have expected the honor, but she’s certainly put in the time and effort that led to it. For the last 30 years she’s been a devoted member of the Hopkinton Women’s Club (HWC), volunteering so much of her time to an organization that she clearly loves.

Throughout the year the HWC focuses on annual fundraising events and initiatives to support local charities and other organizations. The monies raised fund scholarships for Hopkinton High School seniors and have helped out the town’s food pantry, library and Senior Center.

Smith served as HWC president from 2014-16, as well as the club’s recording secretary, and most recently chair of the Publicity Committee.

During Smith’s time as president, Hopkinton celebrated its 300th birthday. Under Smith’s leadership, members designed and produced a float for the tricentennial parade.

One of the HWC’s most significant fundraising and time-consuming projects is publishing the local telephone directory for Hopkinton residents. According to past president Barbara Buchner, “Marie has been the main force behind its successful production for years.”

Buchner said thanks to Smith’s tenacity, energy and publications skills, the telephone directory continues to bring in more than 50 percent of the HWC’s fundraising budget each year.

Unfortunately, the pandemic has caused the directory to be put on hold temporarily.

“We’ll put it to rest for one year and then revisit it,” Smith said.

Pre-pandemic, Smith organized another successful fundraising activity, teaching a wine glass painting class, which went on to raise $1,000 for the HWC. The club now is selling handcrafted signs through its website (hopkintonwomensclub.org) to raise money for its scholarship fund.

“Marie is incredibly giving of her time and talents,” said HWC president Nancy Tarsi. “She has so much energy, always saying, ‘How can I help?’ ”

It seems the feeling is mutual, as Smith speaks fondly of the HWC and its members.

“My heart and soul go into this club,” she said. “It’s such a rewarding experience belonging to it. It’s made up of an unbelievable group of exceptional women.”