Independent Thoughts: Residents get creative to support each other

It’s not surprising that so many people in town have stepped up and found ways to help each other during the coronavirus pandemic. That said, it is impressive how creative some people have gotten in finding ways to support and honor their neighbors and friends, especially those most in harm’s way.

Here’s a look at a few such people and projects. There are others, and we’ll highlight more uplifting stories at our website (HopkintonIndependent.com).

Local photographers Sara Maida and Bernadette Markey heard about the Front Porch Project from a woman in another Massachusetts town and decided to see if it would work in Hopkinton.

“It started with a photographer in Needham, who went around to different families and took front porch pictures,” Maida said. “A few of us in town saw it and thought it would be a great thing to use our talents to help others.”

Added Maida: “I initially started [publicizing] it with the Hopkinton Moms Group just to see where the interest was. Then every time somebody posted a picture I’d probably get five or six additional emails from it. It’s just been a lot of word of mouth.” 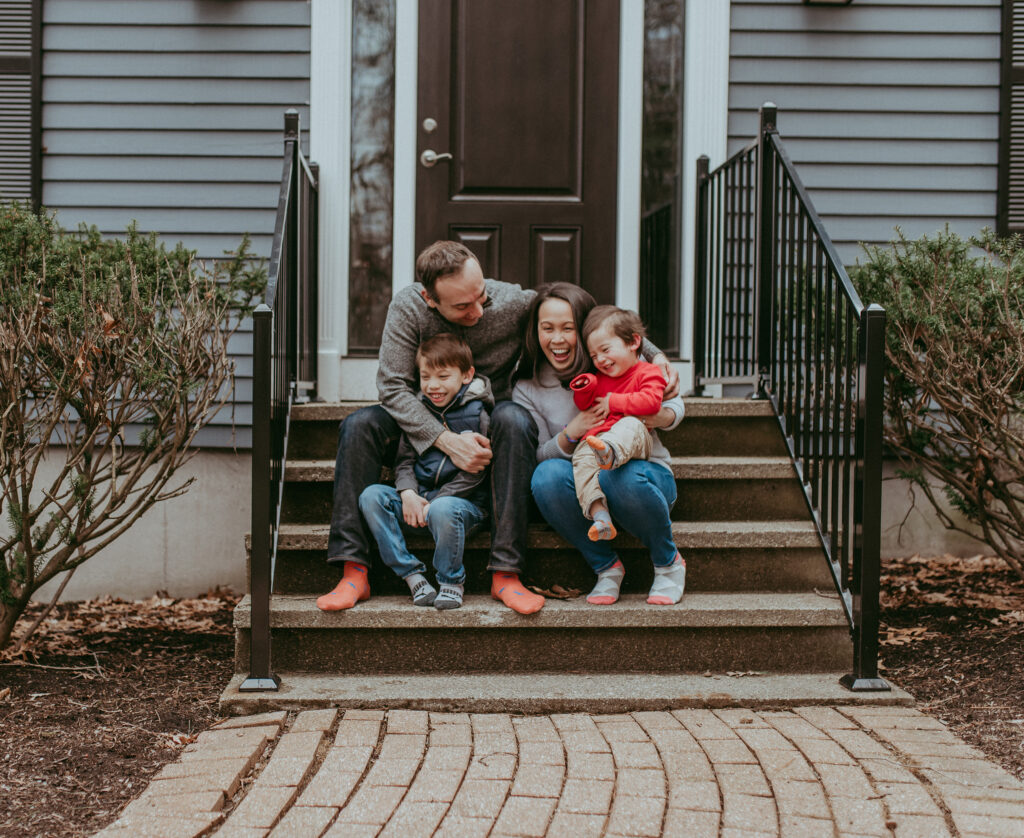 The DeCandia family enjoys a light moment while posting for a picture as part of the Front Porch Project. PHOTO/SARA MAIDA PHOTOGRAPHY

Maida and Markey visit a family, take a few quick photos in front of their house (staying a safe distance away, of course), email them the photos and request a donation — “Whatever they feel comfortable donating,” Maida said — to the local food pantry Project Just Because.

In addition to raising money for a worthy cause, the project has allowed people to have more human interaction.

“I think it helps everyone’s morale,” Maida said. “A lot of people have said, ‘It’s the first time I’ve gotten dressed since this all started,’ [or] ‘It’s the first time my family really spent five minutes just sitting.’ We’re able to capture a moment in time that we’ll hopefully never get back again.

As of last week Maida had visited more than 40 homes and had a similar number on her waiting list. She goes out every few days, weather-depending, and tries to hit 15-20 homes in a two-hour window.

Maida said the project has been as enjoyable for her as her subjects.

“It’s been great for me to see other people besides the three people that live in my house, and have the brief social interaction,” she said. “I think that’s how everybody else feels. Sometimes people want to have you stay and talk for hours.”

For more information on the Front Porch Project, email semaida@gmail.com or bernadettemarkey39@gmail.com.

Lindsay McDermott wanted to honor all those people who are putting themselves at risk during the pandemic — first responders and medical workers, to be sure, but also all the other people who are doing their part to help the public get through this difficult time, including supermarket employees, delivery drivers and others.

Her idea was a tribute on the Town Common.

“Basically we have lawn signs, and we are putting the name of someone on each sign to honor them,” she explained. “It will be like the Fire Department but also people in town who are working on the front line — if they’re nurses, or doctors, or the guys delivering oil in town, anything like that. We’re just calling these people out in town and saying there are this many people helping out, we should be thankful for them.”

McDermott originally planned to use a small area of the Town Common, but she already had 250 names as of April 13, so the display will be a lot bigger than anticipated. And that’s fine with her.

“It’s kind of been crazy, the outpouring we’ve had,” she said. “We thought we were really going to have to search out some of these people. It was easy to get the DPW and the Fire Department and the police, but people have been reaching out with other members of the community. And I’d love to still have more names of people. I know there’s a ton of people out there who aren’t being honored, and they really should be for what they’re working on and doing.”

Added McDermott: “A resident in town emailed and said her husband is a manager [at a supermarket in a neighboring town]. I told her he’d already been nominated. She called me and was in tears that somebody would have already nominated him. She thought it was amazing that somebody had already thought of her husband. So I think it’s wonderful for everybody involved.”

McDermott enlisted help from fellow residents Davinia Magargal, Jessica Staffieri, Sophia Vernovsky, Natasha Clarke, Missy Doran and Rachel Dobinski to pay for the signs and hand-write each name. The Dobinski family also donated a large thank you sign that will explain the project.

“I have a friend who’s a nurse with three kids in town,” McDermott said. “She goes in and she comes home and she always worries that she’s bringing it back to the kids, but there’s not much that she can do about it. They should be honored for having their families go through it. It’s tough for all of us to sit at home, but I can only imagine how much worse it is being out there.”

For more information on the Town Common tribute or to nominate someone to be honored, email lindsay.mcdermott@yahoo.com.

If you noticed a lot of stuffed bears outside homes on March 28, that was no coincidence. Inspired by the children’s book “We’re Going on a Bear Hunt,” residents were asked to display bears in their front window, driveway or yard.

One participant reported seeing 55 bears in neighborhoods all over town. 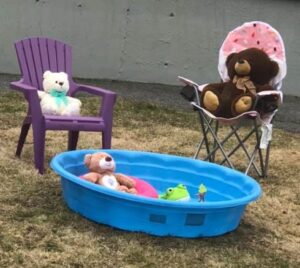 Stuffed bears enjoy an afternoon outside a Hopkinton home as part of the March 28 Bear Hunt.

Organizer Anne Mattina explained that she heard about a similar event being planned in her Western Massachusetts hometown, so she thought she’d try it here. She pushed it out on social media, and the response was impressive.

“People really embraced it, which was great,” Mattina said. “It was just a great way to spend an hour to two without violating the [restrictions] we’re living under, in terms of social distancing.”

Like many others, the Bishop Rice Council of the Knight of Columbus (serving Hopkinton and Ashland) had an event canceled due to the pandemic. Instead of giving up on the Food For Families food drive, the council is taking it online.

The second option is to visit the PJB website at projectjustbecause.org, scroll down to Amazon Wishlists, Food Pantry, and donate there. Again, the items will be shipped directly to the PJB office.

← Letter to the Editor: We must learn from pandemic, fix health care Town of Hopkinton COVID-19 update for April 21 →