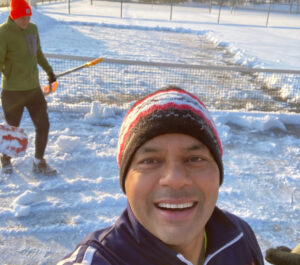 Sundar Sivaraman (front) and Rajesh Yadav, who have been playing tennis together consistently for about 20 years, have continued their regular morning matches throughout the winter, shoveling off the court if needed.

Anyone who regularly watches the Hopkinton Planning Board meetings knows that board member Sundar Sivaraman plays a lot of tennis. It often comes up when the group plans a site walk for a Saturday morning, which is Sivaraman’s prime tennis time.

It would be reasonable to assume that Sivaraman is playing at an indoor facility, especially this month, with multiple storms leaving a blanket of snow over the region.

But we’re living in strange times, and these times call for some creative adjustments.

Not only does Sivaraman play outside — usually at the courts next to Ashland Middle School, but occasionally at the courts in front of Hopkinton High School — sometimes it requires shoveling (or snowblowing) the playing area. Oh, and he plays against the same opponent almost every time out — for almost 20 years — Ashland resident Rajesh Yadav.

Sivaraman’s games used to be limited to weekends, and only during spring, summer and fall. In the winter he and Yadav turned to other forms of exercise, such as running and badminton. However, the pandemic sparked a change in their schedule.

“Until 2020 we would play without fail Saturday and Sunday, but starting after COVID hit and our workplaces closed we upped the tempo and started playing a lot more frequently,” Sivaraman explained. “We had time in the morning because I didn’t have to dress up and go to work. So where we were playing only on Saturday and Sunday, that changed, and we started playing probably four times a week.”

The weekday matches start around 6:45 a.m. and last about an hour. On the weekends they’ll play for two hours. And while the weather occasionally will keep them away — especially if the conditions are unsafe — most of the time they just put on an extra layer or two of clothes and get to work to make the court as playable as possible.

“The biggest challenge in the cold weather is you’ve got to get bundled up,” Sivaraman explained. “We have to wear long pants and a running jacket and some kind of gloves. It’s very cold that early in the morning, but we’ve played when the temperature was as cold as 10 degrees.”

The extreme weather also forces a change in how the game is played.

“The ball will not bounce as much when the ground is cold,” Sivaraman said. “You’ve got to move a lot more toward the ball in winter. That’s the biggest challenge. Otherwise, tennis is just like running. There’s enough running around so that the cold doesn’t bother us.”

The men, both in their early 50s, met about 20 years ago when they were part of a bigger group of recreational tennis players. Over the next few years other players left due to injury or relocation, and it was down to two. And that was fine with them.

“Both of us have been playing recreationally, both of us are about the same age, so it’s more fun,” Sivaraman said.

And who usually wins?

“It’s a mixed bag,” Sivaraman said with a laugh. “The game is so equal these days. It’s always a split. I have good days and not-so-good days. Both of our games have improved a lot. But on the other hand, because we’re only playing each other, we’re not going beyond that [for a comparison]. Nobody else is coming to challenge us.”

Occasionally another friend or two will join them, and they will expand to doubles. But most of the time it’s just the two old friends. And Sivaraman hopes it will stay that way for a long time.

“If we end up retiring, this is how it’s going to be,” he said. “At the very least, we’ll get a couple of hours of tennis.” 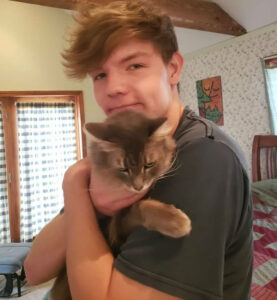 Hopkinton High School student Tyler Delorey has volunteered his creative services to help Baypath Humane Society, which is where his family adopted a cat, Dusty.

Due to the pandemic, volunteer opportunities have been limited at Baypath Humane Society, the animal shelter in Hopkinton. However, Hopkinton High School student Tyler Delorey found a way to contribute. Delorey, whose family adopted a cat from Baypath, used his graphic design skills to help create visuals for the organization, designing social media graphics and video to get attention for a dog in need (the dog since has been adopted).

“We are on a budget but still need a professional look to our communications,” said Baypath board member Sandra Gittlen. “Having a talent like Tyler offer his skills helps us achieve this goal.”

Delorey volunteered as part of his National Honor Society commitment.