A memorial service will be held at the Town Common on Saturday, Sept. 11, to recognize the 20th anniversary of the 9/11 terrorist attacks and also remember the veterans who died since the start of the COVID-19 pandemic.

Normally, funeral services for veterans are attended by fellow vets, but the pandemic changed that.

“The intention is to honor the veterans who did not have an opportunity to be honored due to COVID,” explained Hopkinton veteran Ted Hoyt, one of the organizers. “The veterans who have died in the last year and a half, a number of them did not have services.”

The American Legion will be on hand as well as the Old Guard, which is planning a memorial gun salute.

Mike Whalen will lead the event, which will include individual acknowledgement of the veterans being memorialized.

The Hopkinton High School band is scheduled to appear, and state Rep. Carolyn Dykema, will read a tribute.

On a related note, the monthly Veterans Breakfast at the Hopkinton Senior Center remains scheduled for Friday, Sept. 3, from 9-10 a.m. 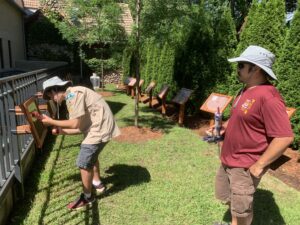 Sean Thapa (left) seals the wooden container he built to hold a story walk outside the Hopkinton Public Library while his father, Kul, watches. PHOTO/JERRY SPAR

Sean Thapa’s Eagle Scout project is an appropriate one considering the times.

Thapa, a Hopkinton High School senior, constructed wooden holders for a story walk in the grassy area behind the Hopkinton Public Library. Each post is designed to hold one or two pages from a picture book, and children walk along from post to post to read the entire book.

“The idea of story walk is to inspire love of reading while promoting healthy outdoor activity,” Thapa explained.

The library had introduced story walks during the pandemic by placing pages on the walkway outside the building. Thapa’s work allows for a more permanent display that is protected from the weather.

The official handoff to the library was scheduled for late last week.

A few residents asked about the status of the Hopkinton Tennis & Swim Club, which was to be constructed off Lumber Street.

A representative from the club, Jeremy Taft, responding to our inquiry, explained that the pandemic has led to “unprecedented delays, disruptions and uncertainty on construction projects.”

However, Taft indicated that the project has not been abandoned, as some had feared.

“We are currently in the reconstruction phase and eager for the project to start,” he wrote via email. “Several factors have delayed the construction process, and we hope to have a significant update soon.”

The Treblemakers, a community chorus based out of the Hopkinton Center for the Performing Arts, had put out a call for new members last month with a plan to return to in-person rehearsals.

However, the COVID resurgence has put a hold on the plans for live practices. The plan is to evaluate the situation at the end of September and hopefully plan for in-person rehearsals in October.

The group is hoping to hold holiday concerts on Dec. 9 and 11.