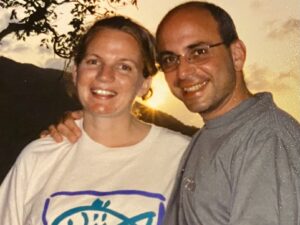 Sheila Zarba-Campbell was living with her husband, Chris, on Ash Street when he perished on 9/11.

The world changed that day as Americans witnessed the deadliest terror attack in history. For Zarba-Campbell, her world changed more than most.

Her husband was aboard American Airlines Flight 11, the plane that hit the North tower at 8:46 a.m.

Christopher Zarba Jr. was a software engineer headed to California to work with a customer there.

“He got up really early that day because it was an early flight,” Zarba-Campbell recalled. “I do remember him saying ‘I love you’ before he left. I took my son to daycare and I went to work. We started hearing reports about a plane having hit the World Trade Center. I pictured a small plane like a Cessna. So I just kept on working.”

Zarba-Campbell’s parents, retired and living in New Jersey, called their daughter after hearing about the plane from Boston — not knowing if her husband was on it.

She put in a call to American Airlines, and it quickly became clear that the situation was grave.

Said Zarba-Campbell: “When I got someone on the phone I said, ‘My husband was flying on Flight 11 today. Can you tell me what’s going on?’ The woman said, ‘Let me take your contact information.’ That’s when I got really scared. Because I thought if everything was fine she would just tell me that. Then I started looking at what was going on and it got really scary.”

A colleague drove her home, where she was met by her church’s priest, who had been called by a mutual friend. Friends and relatives soon followed.

A friend suggested she avoid delaying a memorial service, so they scheduled one for that Saturday, Sept. 15, which would have been Chris’ 48th birthday.

Meanwhile, friends, family, politicians and media reached out to her at her Ash Street home, upending her life even more.

“It was crazy,” she said. “We had to get a second phone line put into our house because we couldn’t make incoming or outgoing calls; we were getting so many calls from media, people who knew Chris, everyone who ever met him, practically. It wasn’t like now where everyone had cell phones. We really needed that land line, but we couldn’t use it because we were inundated. Senator [Edward] Kennedy and Cardinal [Bernard] Law were calling, and all the media. It was crazy.

“Then people would call and cry to me over the phone because they were like a friend of his from college, and I was consoling them. I thought, ‘This is weird.’ ” 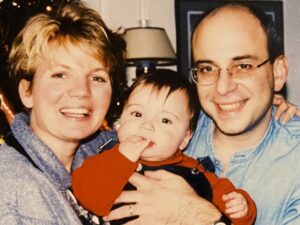 Sheila Zarba-Campbell and her son, Chris, formed a tighter bond after the death of her husband, also named Chris, on 9/11.

Focus on the child

Through it all, Zarba-Campbell couldn’t forget about her 3-year-old son, also named Chris.

Zarba-Campbell said her son only has “flashbulb memories” of his father and no recollection of 9/11, although at the time he could tell something was wrong.

“He kind of got what was going on based on everybody’s behavior,” she said. “I finally had a chance to take him aside alone in a room with just my very good friend, and I couldn’t get him to look at me or pay attention, because he knew what I was going to tell him and he didn’t want to hear it. It took a period of months for it to [sink in].

“He talked early, so he was extremely articulate and he knew what was going on. So he got it. I think it was January when he said to me, ‘When people die, do they ever come back alive?’ And he said other stuff like that over a period of months. But he got it.”

Zarba-Campbell previously was a regular viewer of the television news, but that changed that day.

As Joe Zarba explained to the New York Times in 2001: “It’s a horrific experience watching your brother die over and over and over again. To know that he had a half-hour of terror on that plane is only helped by the fact that now he is in a better place.”

Eventually, family and friends visited less often, and Zarba-Campbell had to learn how to cope with her new existence.

“Other people start to go back to their regular lives after six or eight weeks,” she said. “Then it’s hard, because you think, ‘OK, well, I’ll go back to my life.’ There’s this period of time that’s like crisis time. You’re like, ‘OK, I’m in a crisis, it’s different, I can do this, I can get through this.’ Then when the crisis time is over and everyone goes back to their lives, your life has been blown up, you don’t have a life to go back to. That’s what’s hard. You don’t have the protection of the shock and disbelief and stuff. You have to really reckon with, ‘Oh, man, what am I going to do?’ ”

One of the priorities was getting her son back into his routine.

“There was a week where he didn’t go to daycare,” she said. “Then I went with him the following week and I stayed with him. That’s what they said, ‘Just stay here with him in daycare.’ He didn’t need me to be right next to him, but he needed me to be somewhere he could see me. So I sat with the younger kids and they would sit on my lap and stuff. It was very therapeutic for me, too — sitting with the kids. And he was fine, as long as I was there. But as his sole surviving parent, he kept a really close eye on me.”

That bond continues to be tight.

“We’re very close,” she said. “We went through a lot together. I felt very protective of him for the longest time. A 3-year-old, they’re sad, but only briefly. Then they run off and act silly and funny and play with their friends. That cheers you up. Obviously I wanted to be there for him. But it was tough, especially on the weekends, just sitting around. During the week you’re busy, you have work and your kid has daycare and stuff. But the weekends is the time when families usually spend time together. And we would sit in the house with the really obvious absence of Daddy Chris.” 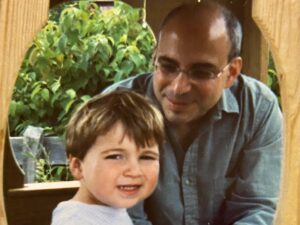 Things started to change in a positive way after she began attending a support group for 9/11 widows with young children. That’s where she met Haven Fife, who already had two sons and was one month pregnant with a third child when she lost her husband.

The two women maintained a friendship outside of the group. Eventually, Zarba-Campbell suggested Fife start dating again, and she introduced Fife to her brother, Dan Kiernan.

Recalled Zarba-Campbell: “I said, ‘Go on a date with my brother. He won’t be freaked out by the fact that you’re a 9/11 widow. … He’ll be your rebound guy, then you’ll get past the whole thing of never having dated anyone but your husband. Then you can go on a date with somebody that you’ll end up marrying.’

“Then she ended up liking him, and he liked her. So he wasn’t the rebound guy. He ended up being the guy that she married. … They recently celebrated their 17th anniversary.”

Likewise, Zarba-Campbell was able to overcome her grief and make a connection with someone else — Stephen Campbell, who was a work colleague and friend of her late husband.

They got married and moved from Ash Street to a house across from the Town Common in 2003. They had a son, Teddy, now a 15-year-old high school student.

Her son Chris, who was adopted by Stephen, recently graduated from Northeastern University with a degree in computer engineering.

Through it all, the elder Chris has not been forgotten. Sometimes the reminders are not so pleasant, such as the multiple times authorities reached out to Zarba-Campbell to tell her they had found more of her late husband’s remains.

Zarba-Campbell remains close with her late husband’s family, many of whom live in the area. Earlier this year, they spread the last of Chris’ ashes in the Hudson River in the Adirondacks, where the Zarba family has a cabin.

Zarba-Campbell normally does not work on Sept. 11 to avoid listening to people talk about it, but otherwise she does not hide from it.

When 9/11 planner Osama bin Laden was killed by American forces in 2011, she could not help feeling a small sense of vindication. She also expressed gratitude that no Americans were injured in the mission.

“I was glad that he was gone,” she said. “I’m not usually a fan of that, but I think that was a special circumstance. It was bothering me that he was still out there, trying to get people to commit more acts of terrorism — and getting away with what he got away with. There was no question he was guilty; he was taking credit for 9/11 and a lot of other terrorist acts.

“I remember I had to go to New York for work the next day, and of course everyone was talking about it. I had a silly grin on my face. I said. ‘OK, full disclosure: My husband was killed on 9/11 and I’m very happy that bin Laden is dead.’ What can I say? People don’t understand it if they haven’t had that experience.”

Coincidentally, Zarba-Campbell studied political science, including Middle Eastern politics, when she was a student at Wellesley College.

Said Zarba-Campbell: “Years before 9/11, when the Taliban were running things in Afghanistan and really oppressing people badly, I remember saying to my husband, ‘We really need to do something about the Taliban.’ And he was like, ‘Well, it’s not our problem.’ I just think it’s incredible that they were harboring al-Qaeda. You can’t just ignore what happens in other parts of the world and think it’s not going to affect you, because it does.”

She said it’s important to distinguish between peaceful Muslims and extremists “who are just so militant and harsh and oriented around violence,” and she’s pleased to see Hopkinton becoming more diverse.

After working in fundraising for her alma mater as well as Harvard University and Wheaton College, Zarba-Campbell now is the campaign director for St. Francis House, a homeless shelter in Boston. It’s helped her appreciate what she has and made her become more socially aware and active.

“I was in the field of fundraising for higher education, and I always felt strongly about the importance of scholarship, research and discovery and teaching to combat ignorance,” she said. “But I think after 9/11, when I found it hard to function in my daily life, I was fortunate to have a lot of emotional support, financial support — the kind of support that a lot of people don’t have. I think that that has really informed my work at St. Francis House, where I work with people who experience trauma and do not have the financial support and emotional support that I did. And perhaps their trauma is repeated trauma over a period of many years. And so I can really empathize with people who find it difficult to function and may end up dealing with substance use disorder.

“So I find it really rewarding to be able to do what I can.”