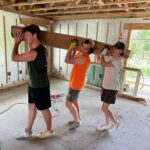 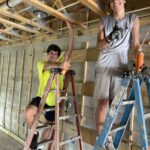 Manoli Barris (left) and Sam Scire pause for a photo while helping with the construction of a house. 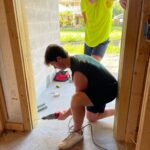 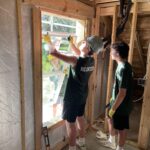 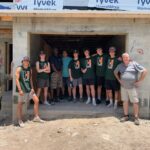 Hopkinton High School student volunteers pose with their supervisors during their Habitat for Humanity trip to Tampa, Florida, last month.

One of the many negative consequences of COVID pandemic had been a restriction on volunteering. In particular, each summer a number of Hopkinton teenagers join charitable or religious organizations that travel to other states and help build homes or do repairs for those in need of assistance, but the pandemic forced the cancellation or alteration of many trips.

Manoli Barris, a rising senior at Hopkinton High School, decided to take matters into his own hands. First he did some research and found a Habitat for Humanity location in Florida that was looking for help and was willing to accept volunteers.

“I reached out to different Habitat for Humanity locations — I called a couple up here in New England, but I got the feeling with COVID guidelines it would be impossible to do that kind of volunteering up here,” he said. “So I started calling places more southern and western — out to Chicago and down to Miami. I came across the Habitat for Humanity in Tampa and found out that they’re one of the top Habitats in the United States. They said with COVID you could probably only bring a group of six or seven. So I got a group of six and we went down there.”

Barris’ friends — classmates Sam Scire, Tommy McAuliffe, Spencer Horgan, Cal Greenwood and Michael Berman — were quick to jump on board. Together with two adult chaperones (John Barris and Benton Berman), they headed south and rented a home for the week of July 11-18.

After a day to themselves, the group headed to the job site — three duplexes under construction — and were put to work. Considering none of them had prior experience with home building, they weren’t sure what to expect.

“The first day, we walked in and I didn’t really know how it was going to work,” Barris said. “We were greeted by these really nice people. They gave us a brief overview and told us what we’d be doing. After an orientation of about an hour-and-a-half, they gave us tools and we started putting in windows. What’s really interesting to me is they gave us so much responsibility, which I thought was really cool. We were putting in windows, putting in doors, cleaning up, putting in different kinds of insulation.

“For the first couple of windows we did it with the supervisors teaching us, but after that they were like, ‘All right, can you go put in a window on the second floor?’ We were drilling into concrete, all this stuff. I was really surprised with the freedom they gave us. It was really cool to see that different type of work — putting in windows, putting in doors specifically, that I found interesting. Now I have a much better idea of how it works.”

The work hit home one day when one of the future residents made an appearance.

Recalled Barris: ”One day there was a woman standing outside of the duplexes staring at one of the apartments, and I said, ‘Hey, can I help you?’ She said, ‘Oh no, don’t worry, I’m actually moving into this apartment.’ At that moment I was like, oh my goodness, let me go over to her. I really wanted to get to know her and see who these people are who are moving in here.

“She was a fantastic woman, a hard worker. It was unreal. She was saying, ‘What a big yard, my kids are going to love it.’ I could tell she was just sweet to the core.”

Added Barris: “The way they described it to us on the site is that the people who are getting these homes are people who really want to put in the work but they never really got the good chances, the shot they deserve. And they’re not just giving these homes away. They make you pay, but it’s a reduced price and a zero percent mortgage.

“It was definitely a meaningful experience to meet that woman.”

The group worked from 7:30 a.m. until 2:30 p.m. five consecutive days, and checked out Tampa during their free time, including a visit to the University of Tampa one day and the local beach another afternoon.

Now back in Hopkinton, Barris said he’s already thinking about making another trip next year and perhaps getting involved with the HHS Habitat for Humanity club.

“I really think all of us would want to do this again,” he said. “I’m thinking of making it an annual thing with our group. We really loved it, and it was really meaningful for all of us.”

Twenty riders from Hopkinton will be among the more than 6,000 participants in the 2021 Pan-Mass Challenge, a two-day, 211-mile bikeathon across the state Aug. 7-8. The event is the primary fundraiser for the Dana-Farber Cancer Institute.

Riders have 16 routes from which to choose, covering between 25 and 211 miles, and there is a virtual option as well.

For more information on the event or to make a donation, visit pmc.org.

With people moving away from live television and toward streaming platforms, HCAM, the town’s local television station, is paying a price. Funding for HCAM comes from cable TV subscribers, so when those numbers drop, HCAM’s revenue falls with it.

Some states, including Massachusetts, are considering bills that would extend the contributions from cable providers to include streaming services. Jim Cozzens, HCAM’s station manager, has reached out to the community looking for individuals to sign a petition (thepetitionsite.com/711/673/424/support-massachusetts-bill-h.130) in support of the bill.

“Here at HCAM, we exist to connect our community of Hopkinton, from our schools and town government to nonprofits and sports teams, businesses and individuals, we are all Hopkinton, and I hope that you will consider supporting us, and this current bill,” Cozzens wrote.