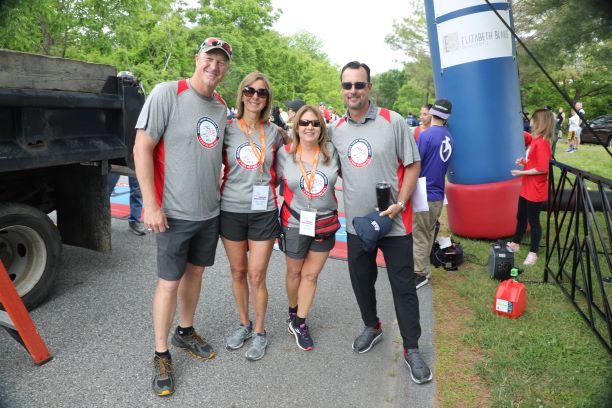 The June 15 Sharon Timlin Memorial Event was an especially bittersweet one for Abbie Rosenberg.

The founder and organizer of the event since it started 16 years ago, Rosenberg announced plans to step away as director as she focuses on her new career — starting a nonprofit having to do with mental health education and awareness.

Fellow event organizers held a brief ceremony at this year’s event, presenting Rosenberg with a plaque to commemorate her accomplishments — primarily, raising more than $2 million for ALS research (this year’s event brought in about $180,000).

The question now is, who will take over as director? The one drawback to the event becoming so massive and popular is that people are hesitant to volunteer to take on the responsibility. Rosenberg is confident someone — or some people — will step up to ensure the race’s continued success.

“I do think that it will continue because I think the community would like it to,” Rosenberg said. “I have faith that this community will come together and continue this tradition until we can find a cure for ALS.”

This year’s event, which consisted of a 5K road race, a color run and a family fun day, featured appearances from former Red Sox pitchers Tim Wakefield and Mike Timlin. The race is named for Timlin’s late mother, who died from ALS in 2002.

“The event felt really festive this year,” Rosenberg said. “That was what stands out to me. The [Red Sox World Series] trophy was there, the raffles, the silent auction, Hot Acoustics [band] playing was great. It was just a very, very upbeat day, and very well attended on the field. The field was active and spirited, really feeling good all around.

“The kids were having a great time with the games, the crafts, the inflatables, the dunk tank. Families were excited to see the World Series trophy and get their picture taken. The color run was a huge amount of fun for the kids. Kelsey Breslin did a beautiful job singing the national anthem.”

When the event began in 2004, Rosenberg had no idea it would become as big and profitable as it did.

“I was kind of told that there was no way I was going to raise more than a few thousand dollars doing a 5K,” she said. “The first year I was surprised myself. Even though it was only 400 runners, we did raise $70,000, which was a lot more than my goal. It was a small playing field and a tiny little family fun day. I think it was then that I saw the potential of how big and how much fun this day could be and what a great community event it could turn into. The seed was planted very early on and it just did get bigger and bigger.

“I think a lot of it has to do with our community. Part of it is the ALS community and how passionate anyone that’s been impacted by ALS feels to help find a cure. I think it’s a combination of the ALS community, and then the community of Hopkinton just embraced this thing and has supported it. Whether it be the volunteers or the schools or the Fire Department or the Police Department or the organizing committee, the people of Hopkinton have thrown themselves into supporting this, and that’s what I think has made it so successful. Because it really, truly is a team effort.”

While Rosenberg has spearheaded the organizing efforts, she’s not the only one who has been on board since the beginning.

Rosenberg said she will miss the camaraderie within the group.

“The friendships and bonds that so many of us have formed in planning this,” she said. “The trials and tribulations, but all the fun and bonds that we’ve formed. I’ll really miss that a lot.”

The feeling is mutual.

“Abbie has been a persistent spark plug,” said Allen, who also is stepping away after 16 years. “She’s incredibly driven. It’s insane how much she’s done and how much the event has raised. Every year Abbie would say, ‘We’re going to shoot for $100,000 this year,’ and we’d go way past it.”

The money has been put to good use, as developments have been made toward finding a cure for ALS.

“The biggest thing that stands out, especially in the past three years, is the amazing amount of progress they’ve made toward a cure with some new gene-silencing techniques that are getting close to human trials,” Rosenberg said. “In the last three years they’ve really come a long, long way, thanks to our money. That’s a big standout, because that’s one of the major goals of the event.”

When the event started, Rosenberg’s sons, Zach and Evan Sisitsky, were toddlers. Now Evan is a rising sophomore at Georgetown University and Evan is headed to Loyola of Maryland. 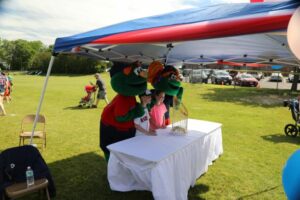 A couple of young fans get their photo taken with Red Sox mascots Wally the Green Monster and Tessie along with the World Series trophy at the family fun day portion of the Timlin Event.
PHOTO/JOHN CARDILLO

“My kids were 2 and 3 when we started,” Rosenberg said. “They know more about ALS than most adults and have been a part of this every year, whether it be going to hang up posters or going with me to things. And they’ve gotten to know a lot of people with ALS. They’ve learned a lot. And I think it’s made them better people.

“It really has become a family affair. We’re all going to miss it, but we’re all excited to be involved and enjoy it still.”

Added Allen: “We’ve all brought our kids up in this realm of volunteerism and giving back.”

Rosenberg may be stepping down as director, but she said she will continue to support the event as time allows.

“I will always have some involvement,” she said. “I’ll always be passionate about it and help as much as I can.” 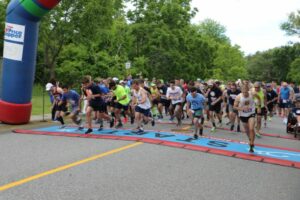 Runners head out at the start of the 5K road race as part of the Sharon Timlin Memorial Event.
PHOTO/JOHN CARDILLO

The Horribles Parade was created in the 1930s by the McIntyre family, which remains deeply involved keeping the tradition alive.

Dan McIntyre, grandson of original parade organizer Charles McIntyre, is the current parade boss, and he hopes there will be more involvement from residents this year. While the floats get the most attention, McIntyre said people can participate in other ways.

“It doesn’t have to be anything fancy,” McIntyre said. “They can ride bikes, they can walk, they can just hold up a sign. We’d just like to see people come out.”

This year’s theme is diversity and inclusion, based in part on the Select Board altering its name from Board of Selectmen — a change that was overwhelmingly approved at Town Meeting in May.

“We thought it would be a good theme this year,” McIntyre said.

As usual, the parade starts at noon at the Town Common. Police cars lead the caravan of fire trucks, antique vehicles and the floats, with candy tossed to parade watchers along with the occasional water fight (for those willing to engage). The route heads up Hayden Rowe, turns right onto Grove Street, bears left onto Pleasant Street and turns right onto Main Street to head back to the common. There the organizers will hand out awards, including the Select Board Trophy, Most Horrible, the Children’s Award and first, second and third places.

Anyone interested in getting more information about becoming involved can email Dan McIntyre at messcorp@aol.com.