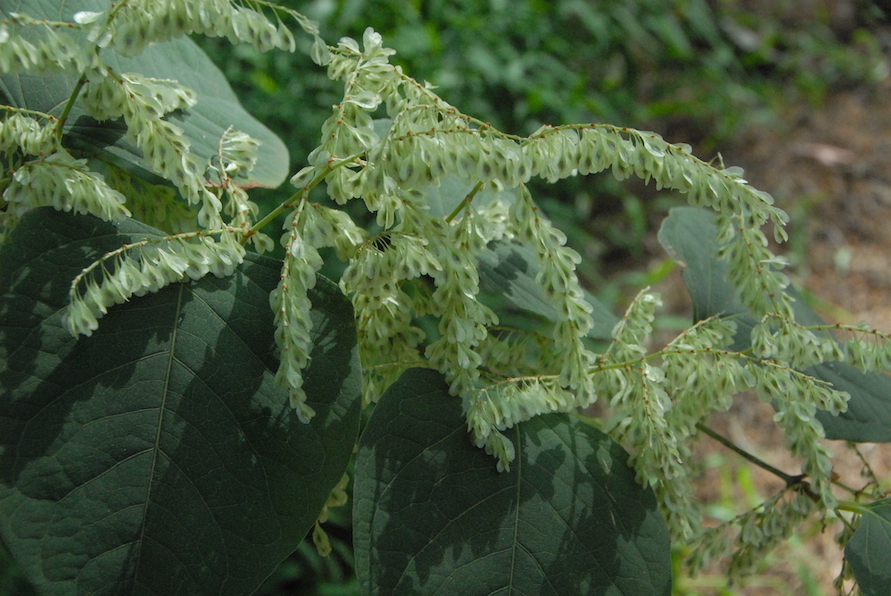 Knotweed, an aggressive invasive, can take over an area and destroy other plant life.

Ed Harrow remembers when his mother discovered vines of bittersweet creeping up the exterior walls of their barn. “My father threw a hissy fit; he was constantly tearing it down, before it tore the barn down,” he said with a chuckle. “But I had no appreciation, until recently, of how really destructive these plants are.”

“I’m on the Open Space Preservation Commission, and my wife, Sheryl, and I, we walk around the Lake Whitehall area a lot, and there was one area where we knew there was bittersweet on DCR [Department of Conservation and Recreation] property … but we didn’t see much else.”

One day, for reasons he couldn’t explain, Harrow felt compelled to take a different route; rather than skirting the perimeter of the Whitehall conservation area, they attempted to cross through the meadow, which once had been the front yard of a house that is no longer on the property.

“It was quite literally impenetrable,” he recalled. “There was the remnant of a path, but it was bittersweet, bittersweet everywhere, making it impassable.”

Harrow got in touch with Sudbury Valley Trustees and learned about the Cooperative Invasive Species Management Area (CISMA) Program. Because Lake Whitehall is on the Sudbury River watershed, it was eligible to participate in the program. Harrow received a grant to have a brush hog, which he described as “a lawn mower on steroids!”

After working to resolve conservation restriction issues with the Conservation Commission and Massachusetts Department of Environmental Protection, “We received a bid from J&B in Hopkinton to do the work, which began several years ago in the fall.” Volunteers also have stepped up to help, including the Hopkinton Trails Club and members of HALT (Hopkinton Area Land Trust) as well as Friends of Whitehall, who assist with invasive removal work and care for the property.

It was after getting involved with CISMA and bittersweet that Harrow learned about other species present in the area: glossy buckthorn and a large infestation of barberry behind the Woodville Fire Station. “But,” noted Harrow, “the big one now that’s everywhere is Japanese knotweed. It is absolutely daunting.”

So what’s not to love about knotweed?

There is debate about whom to credit with — or blame for — introducing knotweed to the United States, but all accounts agree that it was sent to London by 19th century German-British botanist Philipp von Siebold after his visit to Japan. At the time, it was hailed as an ornamental and hardy species.

For those without a green thumb, a plant that can’t be killed sounds like a great thing. But such species can take over an area and destroy other plant life, such as the collection of pussy willow that once existed in the meadow. Bittersweet crawls over ground until it finds something to climb. In the case of the meadow around Lake Whitehall, it found trees, three of which now are dead.

“The vines surround the tree and basically steal the sunlight from the host’s leaves,” Harrow explained. The tree gets no nutrients and dies. The vine clings to its host until it eventually falls and rots away.

Knotweed can grow as much as 4 inches per day. Its roots can sneak under and break up pavement; its vines will overtake structures, exploiting cracks and weaknesses. In some regions, the presence of knotweed can devalue a house by as much as 20 percent. Banks have been known to refuse mortgages where knotweed is present, or require implementation of a professional knotweed management plan.

Knotweed is especially hard to control because it can spread by various means — topically, via seeds; with the rhizomes on its roots, which shoot out and explore horizontally underground; or by stalk cuttings that take root, which means that attempts to cut them down may serve only to spread them if not followed up with chemicals.

Collectively, invasives have cost the world an estimated $1.3 trillion over the past half-century by ruining agricultural yields, undermining tourism and impacting public health. Here in Hopkinton, this particular invasive — knotweed — currently threatens to overtake a 40-by-50-foot space in the farthest corner of the meadow from the lake.

The only treatment that has shown promise is chemical, of which Harrow isn’t a fan. “I’m on the Conservation Commission! But sometimes, ya haf’ta go for the big one,” he acquiesced.

The process is to cut the vines to a couple inches above the ground and squirt herbicide directly into the stalks. “It’s extremely targeted,” Harrow assured. “There’s no overspray.” He added that he worked with the Water Department to ensure the chemicals wouldn’t affect the town’s supply. Fortunately, the treatment area is located outside of the well protective area.

Even with such concentrated efforts, the knotweed will return next year. Treatment must be repeated over several years to fully eradicate the problem … and, said Harrow, they’re still finding more: “Every day, you turn around and there’s something else, and in places you didn’t expect.”