Recupero to play soccer at Duke 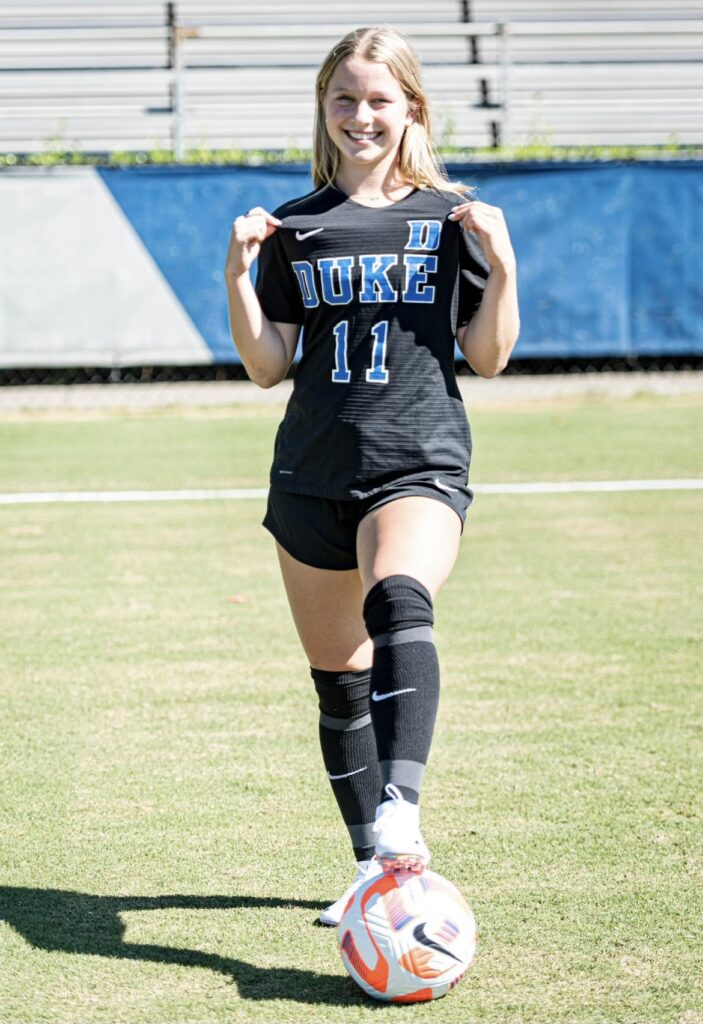 Sophia Recupero will leave Hopkinton to start her college soccer career at Duke in 2024. PHOTO/DUKE ATHLETICS

Strong academics, big-time athletics and a top-notch soccer conference was enough to draw Sophia Recupero to Duke University for the fall of 2024. It’s a school she said felt like the perfect fit.

“I am super grateful for this opportunity,” the Hopkinton resident said. “The academics and the athletics are both huge at Duke, and the coaching staff is amazing. I loved Robbie Church, their head coach, and the rest of the other coaches. When it came down to it, Duke checked all of my boxes, and that was really important to me.”

Recupero, 16, is a junior at Buckingham Browne & Nichols School in Cambridge and a standout forward at both the prep school and club soccer level. She said she enjoys being challenged, so the chance to take on the top competition in the Atlantic Coast Conference was too good to pass up.

“The ACC was really important to me because it’s probably the most competitive conference in women’s soccer at the moment and it’s important for me to be challenged,” she said. “I really think the ACC is the best conference, and it shows.”

Recupero comes from a sports-loving family. Her mother, Stephanie, played soccer at George Mason when that school was a national championship-caliber program. Her dad, Bill, played college hockey at Bowdoin. During the pandemic, Recupero said she and her siblings, Madison and William, passed the time by practicing and competing in athletic events against one another.

“I give all the credit to my family,” she said. “They are the ones who pushed me the most and it’s helped me. My parents have been the ones taking me to these college tournaments and giving me the help I need to get to this level, they are my biggest supporters.”

Recupero still has 1 1/2 years before she officially becomes a Blue Devil, and she said she plans to use the time to get her game ready for the highest collegiate level.

“College athletes are in the gym all the time and doing the extra work,” she said. “I have to get to the gym and build my strength and put the extra work in developing my skills.”

While she hopes to be able to contribute to the Duke attack from the outset of her college career, she added, “College soccer is really challenging, and nothing is promised to you.”

Recupero’s academic path is not yet clear, but she said she may look to the business school. She said she was impressed by the campus in Durham, North Carolina, and the pleasant southern weather. Recupero added that the coaching staff also talked up the southern cooking.

“I think it’ll be a really great experience,” she said.

When it comes to Duke athletics, men’s basketball is the biggest draw, with students packed into Cameron Indoor Stadium to see the perennial title contenders. Recupero said she looks forward to camping out for tickets to big ACC matchups during the basketball season.

“It’s tough to get tickets, but having great sports teams is so nice for the school’s culture,” she said. “It brings the whole environment up. It’s a school that is like a family.”