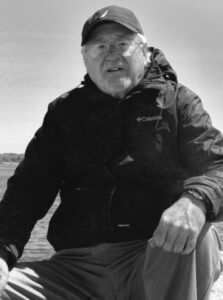 Educator, sailor, car guy and history buff James DeWolfe died at the age of 76 after a long battle with cancer.

He is survived by his brother, Paul, and sister-in-law, Nancy, of Hopkinton, niece Michelle of Broomfield, Colorado, nephew Scott of Oakland, California, and longtime companion Nina Leblanc of Wellesley.

He was born on May 19, 1944, in Framingham. His friends called him Jim, and his family called him Uncle Jim.

Jim’s journey as a lifelong educator started as a graduate of Boston University with a bachelor’s in education and later a master’s degree in guidance counseling from Northeastern. He began his education career at Dublin Academy in New Hampshire as a history teacher, his most loved academic subject. He also was the skiing coach, baseball coach and sailing instructor. Not only was Jim a sports coach, but he was a huge football and basketball fan, cheering on the Patriots and Celtics.

Jim last served for 32 years as a guidance counselor in Rehoboth. Jim was very active during his tenure in Rehoboth and was beloved by students and faculty alike. Jim’s commitment to education resonated in everything he did, and it was a common topic of conversation with his family. He always said that his college and graduate school experiences were transformative. He emphasized the importance of education countless times, and he can be remembered very well by his niece and nephew as saying, “Education makes you think differently, that’s the difference it makes, it will help you make good decisions.” His advice still rings true today, and Jim also continued his learning as an avid reader of history and current events. In his last month he was even quizzed about the Civil War by an attending nurse, and for a moment he was stumped but quickly chimed in on the subject matter.

There is no doubt Jim was a real “car guy,” with an impressive repertoire of facts, figures and stories behind countless automobiles. His book and magazine collection certainly proves his car obsession. He owned various sports cars now considered classics and was always ready to talk about cars — and talk, talk, talk he did. His son-in-law, John Abel, another “car guy,” would talk for hours with Jim at holiday dinners and family vacations. Jim, also the family historian with an impeccable memory, would always fill in the gaps of a story with all the details and dialogue. No one remembered details like Jim!

Jim picked up golf after he retired from guidance counseling, and as he did with most of his interests, he became a fanatic. In addition to golf, Jim was interested in activities that could be described as very New England, if not very Massachusetts. He loved the ocean and boating, and of course Cape Cod. His father, Forest, built a cottage down the Cape in the early 1950s, and that sparked a family love affair with the area.

His brother, Paul, is a professionally trained musician, and although Jim himself was not a musician, he was well versed in classical music and jazz, often visiting Symphony Hall and Tanglewood. Jim frequented Paul’s concerts as well in Fruitlands and various auditoriums and venues throughout MetroWest and Boston.

We will all keep Jim’s spirit alive and continue to enjoy the Cape, boating, classic cars and music, as well as extol education and maybe, just maybe, continue to swing those damn golf clubs.

Jim last lived in Hopkinton, where his mother, Lillian, grew up, and he is now in the care of Callanan Cronin Funeral Home. A graveside service is scheduled for June 25 at 10 a.m. at St. John’s Cemetery. Please send donations in memory of Jim to the Dana-Farber Cancer Institute.