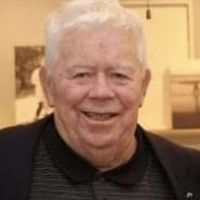 James “Jim” Hanna, 86, of Ashland died peacefully surrounded by his loving family on Jan. 9. He was the beloved husband of Leila (Sherman) Hanna of Holliston for 64 years. Born in Natick, he was the son of the late John and Mary (Flynn) Hanna.

Jim served his country honorably in the National Guard and went on to graduate from Northeastern University in 1959. He worked at RCA and General Electric as a government contract negotiator for his entire career. Jim loved to golf and travel and was a proud participant in Ashland town politics and activities. He served the Ashland community by participating in various boards and committees, including the School Committee, Zoning Board of Appeals and most recently the Ashland Historical Society. He also was a host on the WACA TV show “What’s Really Going ON,” which focused on town politics and current affairs. Jim was an avid New England Patriots fan and will be remembered as a dedicated husband, father, grandfather and great-grandfather.

In addition to his wife, he is survived by his son, James F. Hanna and wife Lenita, his daughters, Karen Lefter and husband Gregg, Susan (Hanna) Thomas, Sharon McLean and husband Bill, and Polly Martin and husband Greg, 14 grandchildren, nine great-grandchildren, his sister, Johanne Burns and late husband Joseph, his brother, Jerry Hanna and wife Christy of Hopkinton, and many nieces and nephews. He was predeceased by a son, Peter S. Hanna, in 1978.

A private graveside service was held Jan. 15 at Wildwood Cemetery in Ashland. Services were under the care of the Matarese Funeral Home of Ashland. In lieu of flowers, donations may be made in Jim’s memory to the Ashland Historical Society, 2 Myrtle St., Ashland, MA  01721.