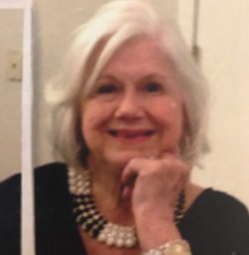 She was born Sept. 8, 1927, in Norwood to the late Albert and Agnes Larkin. She was the sister of the late Robert (Shirley), Allan and Richard Larkin, all of Medfield, and the sister-in-law of Joan Larkin. She is survived by her children, Linda (George) Armstrong of South Dennis, Allan (Patricia) Rooney of Danvers, Janet (Paul) LeDuc of Hopkinton and daughter-in-law Cecile Rooney of New Milford, Connecticut. She was predeceased by her son Robert M. Rooney, who died in 1992. She also leaves nine grandchildren, Nathan and Luke Devine, Christopher, Patrick and Kathleen Rooney, Erin and Daniel Clark and Colleen and Kevin Rooney, and four great-grandchildren, Jacoby and Whitney Rooney and Charlotte and Logan Devine, as well as many nieces and nephews whom she loved dearly.

Janet was educated in Medfield Public Schools and was voted Miss Personality, Class of 1946. She went on to study at the Stratford Secretarial School in Boston and also studied at the New England Conservatory of Music.

Janet was an avid singer and sang for many weddings in Medfield throughout the years. Janet married Robert Rooney in September of 1948 and settled in Danvers, where she raised her four children. Anyone who really knew Janet knew that her claim to fame was that she sang for the soon-to-be President John F. Kennedy in 1960. She was a member of the North Shore Players, the Catholic Daughters and the Couples Club. She was very involved with her children as a Cub Scout den mother and a Brownie leader and loved her time working as a playground monitor at the Portables and Danversport School. She also held positions at the Essex Agricultural School and the Jewish Rehabilitation Center in Swampscott.

Visiting hours will be held on Saturday, Aug. 1, from 10-11:30 a.m. at the Roberts Mitchell Caruso Funeral Home, 15 Miller Street, Medfield, with a funeral service to follow at 11:30, followed by a Christian burial at Vine Lake Cemetery, Medfield.

Those wishing may make memorial contributions in Janet’s name to the Asphasia Hope Foundation (aphasiahope.org) or the Dana-Farber Cancer Institute (dana-farber.org).