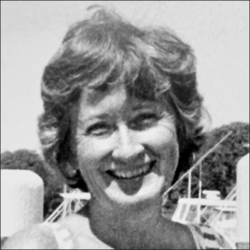 Janet (Parker) Smith, 89, formerly of Hopkinton and Harvard, passed away peacefully on Dec. 3.

Born in Medford, Janet grew up in Wellesley with her parents, Frank and Virginia Parker. She graduated from Wellesley High School in 1950. Janet was a lover of seafood (lobster most of all!) and beaches, and growing up she enjoyed her parents’ cottage in Boothbay Harbor, Maine. She took many trips to that part of Maine as an adult with her own family. While living in Wellesley, she graduated from Lasell Junior College and went on to hold administrative roles with several companies, including Raytheon, where she met her husband, Carlton.

While a Harvard resident, Janet was a member of the Republican Town Committee and volunteered with the Girl Scouts. Janet was crazy about cats and also loved going antiquing. She was an avid reader, always involved with a stack of books. She also greatly enjoyed her time working for the School of Continuing and Professional Studies at Bentley College.

Janet was predeceased by her beloved husband, Carlton Smith, in 2018. Together they shared a love of animals, books, skiing, the Red Sox and the ocean, and they made many memorable trips together to Maine, Hawaii and Cape Cod. Janet was a devoted mother to, and is survived by, their son, H. Scott Smith of Boston, and daughter, Brett Smith.

Janet was a warm, loving person, always having a friendly demeanor and positive outlook. Her smile and sense of humor brightened everyone’s day. Janet will be greatly missed by friends and loved ones.