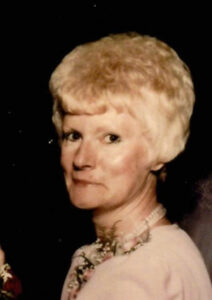 Born in Hopkinton on July 7, 1938, she was the daughter of the late Francis and Agnes (Pyne) Frieh. She was raised and educated in Hopkinton, a graduate of Hopkinton High School.

More than anything, Jo-Anne enjoyed spending time with family and friends, gardening and vacationing on the Cape.

She is survived by her two children, Beth Parkinson and her husband, George, of Douglas, and John “Jack” Kinney of Framingham; five granddaughters, Katelyn and Corey Parkinson, Chelsea MacLean, and Morgan and Sydney Kinney; and two great-grandsons.

She is predeceased by her brother, Philip Frieh.

Her funeral Mass was celebrated Nov. 19 at St. Gabriel the Archangel Parish in Upton, followed by interment at Lakeview Cemetery in Upton. Funeral services were under the care of the Williams-Pedersen Funeral Home in Upton (uptonfunerals.com). In lieu of flowers, donations in her memory may be sent to the Upton Senior Center, 2 Farm St., Upton, MA 01568 or to the Upton Fire and EMS Association, P.O. Box 580, Upton, MA 01568.