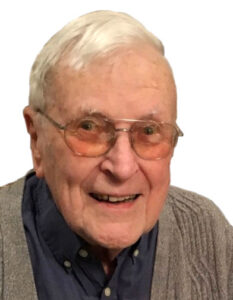 John Freniere 88, of Marlborough and formerly of Natick, died unexpectedly on Feb. 5.

He was the beloved husband of Judith A. (MacDonald) Miller and beloved father to Susan Freniere of Don Pedro Island, Florida, David Freniere and his wife, Diane, of Wellesley, Christine Meyers of Hopkinton, and John Barlow of Fort Lauderdale, Florida. He was a loving grandfather to Jacalyn Williams, David Williams and his wife, Crystal, Christian Freniere, Matthew Freniere, Abigail Meyers and Charlotte Freniere.

John had a brilliant mind for math. He received an engineering degree from Assumption College and worked as an engineer for Raytheon for more than 40 years on a variety of Department of Defense contracts for the missile division.

John had many passions, among them playing and teaching chess and playing basketball with his kids and grandkids well into his 80s. John also enjoyed a nice Manhattan at the end of the day. John had a remarkable sense of humor and never failed to bring a smile to the face of everyone in his company. He could light up a room with laughter. John’s favorite place was Cape Cod, where he vacationed each summer for more than 60 years. John was drawn to the ocean and would often say that he was a fish — and he was. John would spend hours upon hours gracefully swimming the Cape Cod coastline as his family watched in awe from the shore. He would joke that Judy was going to join him in the water one day with shark bait. John was kind-hearted and generous with his time. He was loved by the ladies in his neighborhood for his daily simple acts of kindnesses and by the staff at Kennedy’s Pub, where he and Judy shared so many laughs and wonderful meals. John’s greatest passion was his family. He was a dedicated, caring and loving husband, father and grandfather. He had a twinkle in his brilliant blue eyes when surrounded by his family. He will forever be in our hearts.

A funeral service was held Feb. 9 at the John Everett & Sons funeral home in Natick (everettfuneral.com). In lieu of flowers, donations in John’s name may be made to St. Jude Children’s Hospital, 262 Danny Thomas Place, Memphis, TN 38105.

← George Brown Photo: On track for a title →