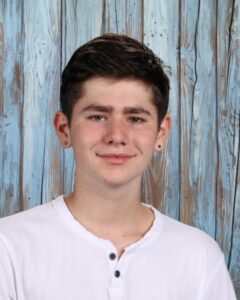 John Alexander Quinones, born Aug. 29, 2006, in Framingham and a student at Keefe Tech, was raised by both his parents and stepparents, Jessica Keenan, Ernie Quinones, Kevin Keenan and Tina Bettuelli. He was perfect. He was and always will be immensely treasured.

On Dec. 23, John passed away unexpectedly. John was an old soul who would give you the shirt off his back and was always willing to lend a hand. He loved his dog, Annie, beyond belief and never met an animal he wouldn’t rescue. Never one to turn down an adventure, he would jump at the chance to go shooting or dirt bike riding with his dad and stepmom, mountain biking with his stepdad or traveling with his mom. John’s love of family was immense, spending summers with grandparents Barbara and John Beatty in New York, and traveling to North Carolina for Thanksgiving to visit with aunts Joanna Beatty and Debbie Reinhartsen and cousins Lauren and Karl Reinhartsen. He thought the world of his brother, David, and loved nothing more than weightlifting together with him.

In John’s 15 years, he traveled across the ocean to Hawaii numerous times. He also spent time in Canada and Europe as well as within the continental United States. He loved visiting with his family in California and exploring the world. When not traveling, he enjoyed playing online games and making connections among the community of players. He also was a sucker for requests to play Nintendo or games at dinner with his sister, Makayla. His smile could light up a room with just one glance, and was the yin to his mom’s yang.

“You never said, ‘I’m leaving,’ you never said goodbye. You were gone before we knew it, and only God knew why. A million times we needed you, a million times we cried. If love alone could have saved you, you never would have died. In life we loved you dearly, in death we love you still. In our hearts you hold a place that no one could ever fill. It broke our hearts to lose you, but you didn’t go alone. For part of us went with you, the day God took you home.” — Author unknown

Visitation for John will be held on Saturday, Jan. 1, from 2-5 p.m. at the Chesmore Funeral Home of Hopkinton, 57 Hayden Rowe Street. Anyone is welcome to pay their respects. Masks are required to be worn in the funeral home regardless of vaccination status. In lieu of flowers, donations may be made to The Society for the Prevention of Teen Suicide, 110 West Main Street, Freehold, New Jersey, 07728 (sptsusa.org/donate).