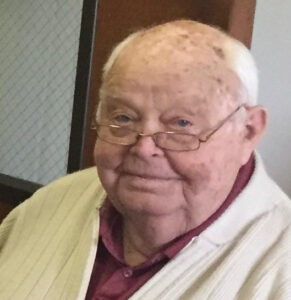 John Irwin Riedle, 92, of Hopkinton passed away peacefully on Dec. 14 at Beaumont Nursing and Rehabilitation Center in Westborough. Born in Hopkinton, he was the son of the late Jane (Robson) and Oscar Riedle. He was the husband of 68 years to the late Arlene (Kempton) Riedle.

Growing up on Hayden Rowe Street, John always talked about how much he loved his life in Hopkinton. He relished telling his children and grandchildren stories of his adventures and escapades with his many boyhood and high school friends. John graduated from Hopkinton High School in 1948. He especially enjoyed playing football at Hopkinton High and was particularly proud of the 1947 team that defeated its biggest rival — Ashland High School — by one point in the last game of the season to preserve an undefeated season.

After graduation, John joined his parents’ florist business, Sunnyside Gardens. John spent many years with the business during which time he and Arlene married and started their family, before selling the business and purchasing a dairy farm in Bellingham. Dairy farming was John’s true calling. He loved raising his family on the farm and the connection he had to the cows and other farm animals, the land and the seasons. The farm was a gathering place for countless family gatherings and celebrations along with the many visitors he welcomed to spend time with him in the barn, telling stories as he milked the cows. After farming, John then worked for the FDIC and for many years in construction, serving as a project manager for home developers in the Milford and Mendon area.

As a man of faith, John served as a deacon and member of the Board of Trustees at Pine Street Baptist Church in Milford. He and Arlene also shared many wonderful evenings with the Couples Club at the Church. More than anything else, nothing brought John more joy and meaning in his life than his love, care and devotion to his family — wife Arlene and their children, grandchildren and great-grandchildren. John was a big kid — rolling around on the grass, playing and telling stories with each generation of children in the family. He enjoyed taking his grandchildren out to dinner, to fairs and to farms. He attended every concert, game, play and parent weekend at his grandchildren’s colleges — through Memorial Day concerts, performances and parades for his great-grandchildren. John was a kind, humble and generous man who always put his family and friends before himself. He had a hearty laugh and enjoyed a good joke and the occasional glass of “spirits.” He is dearly missed.

The family wishes to thank John’s nurse practitioner, Ann, and the nurses and nursing assistants of the Fairbanks Neighborhood at Beaumont for their kind care and support. In lieu of flowers, memorial donations may be made to the Friends of Beaumont, 3 Lyman Street, Westborough, MA 01581, Attn. Lisa Coppola.

A memorial service will take place at a later date. Arrangements are under the care of the Chesmore Funeral Home of Hopkinton.