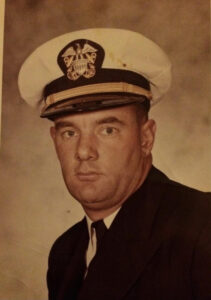 John K. “Jack” Sweet Jr., 85, passed peacefully on June 10 at his home in Hopkinton with his family by his side. Born in Worcester, he was the son of the late John K. (Sr.) and Cora (MacKay) Sweet. He was the husband of Catherine M. (Kenney) Sweet, to whom he was married for 55 years.

Jack was a 1954 graduate of Hopkinton High School and a 1957 graduate of Massachusetts Maritime Academy, where he earned his bachelor’s degree in seamanship and navigation. Following his education, he enlisted in the U.S. military, serving in both the Army and Navy. He was honorably discharged from the Navy with the rank of lieutenant in 1967.

Following his military career, Jack went on to join Woods Hole Oceanographic Institute, using his navigation background to facilitate hundreds of scientific and government-related expeditions on the research vessel Knorr. Most notably, he charted the course that ultimately determined the exact location of the RMS Titanic. He retired from Woods Hole in 1996 after a 27-year career.

In addition to his wife, Cathy, Jack is survived by his two daughters, Jennifer Newman (Eric) and Elizabeth Callahan (Robert, Jr.), four grandchildren, Frederick Newman, Noah Newman, Jackson Callahan and Lillian Callahan, and seven nieces and nephews. He is predeceased by his sister, Brenda A. (Sweet) Danahy, and a niece, Karen Kenney.

Memorial calling hours will be held Wednesday, June 16, from 1-4 p.m. at the Callanan Cronin Funeral Home, 34 Church St., Hopkinton. A service will take place at 4 p.m. in the funeral home. Burial of cremains will follow at St. John’s Cemetery, Hopkinton.

Donations may be made to the Framingham Heart Study.