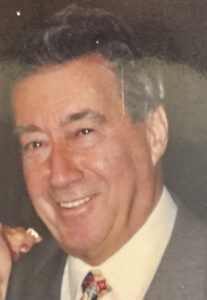 Joseph A. Sergi, formerly of Dedham, passed away peacefully Aug. 10 in his home with his loving family by his side. He was a very proud American and a veteran of the United States Navy, serving on his beloved “Haddo” submarine in World War II and the Korean War. In later years he was instrumental in coordinating the Haddo reunions, which were a huge success. He was the last of the Haddo shipmates.

Joe owned the iconic Sergi’s Barber Shop in Dedham Square for many years until he was no longer able to work. He was 85 at the time. He sold the shop to a wonderful family friend who has kept it running beautifully and made Dad very proud. The “Sergi” name remains on the shop and he was honored by that.

Joe was the second son born to the late Flavia (Capello) Sergi and Domenic Sergi of Dedham. He was the beloved and loving father of M. Michele Buccieri of Rochdale, Linda A. Drake of Hopkinton (formerly of Sturbridge), his late son Michael J. Sergi and wife Kathy of Asheville, North Carolina, and his late son Michael W. Foster and wife Claire of Phoenix. He was the brother of the late Nunzio (Ned) Sergi and wife Lil of Norwood, the late Rita (Sergi) Kenney and late husband Lee Kenney of West Yarmouth, and Mary (Sergi) Keefe and husband Art of Duxbury.

Joe also is survived by eight grandchildren, 16 great-grandchildren and many nieces and nephews, all of whom he adored. His greatest loves were God, family and our country. He had a very special gift of loving, forgiving and helping all who needed him. We are so proud and blessed to have had him with us for so many years.