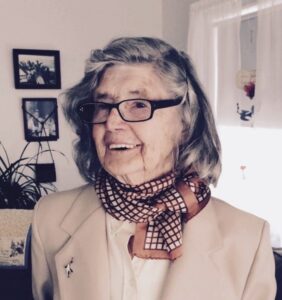 June Marie Ranlett, 91, of Hopkinton passed away April 29 at Denmar Health and Rehab in Rockport following a short battle with COVID-19. Born in Framingham, she was the daughter of the late Eva (Nichols) and William “Arthur” Grant. She was the wife of the late Chester E. Ranlett.

June grew up in Hopkinton and later moved to Eastham. On the Cape, June enjoyed her morning swims, gardening and square dancing and had many friends within the community. She spent her summers with her beloved grandchildren and filled them with a lifetime of joyful memories. Later in life she developed Alzheimer’s disease and moved to Rockport, where she could be closer to her granddaughter and great-grandchildren. She spent the last years of her life creating new memories for them, filled with laughter, joy and singing. June also became a precious part of the Denmar community. The family would like to thank the staff at Denmar for the meticulous care, love and attention they provided June during the last years of her life.

June is survived by two sons, Richard Dwinnell and his wife, Cheri, of Maine and Ronald Dwinnell and his partner, Ilene, of Pennsylvania and California. She also leaves behind two sisters, Rosemary Bleakney of Westborough and Caroline Predmore of Maryland, four grandchildren, Bethany Dionne, Jason Dunton, Joshua Dwinnell and Rachael Walker, as well as 10 great-grandchildren. She is predeceased by her daughter, Janice Greenwood, her son, Randy Dwinnell, and her brothers, Robert, William and Fred Grant.

A celebration of life will be held at a later date. Arrangements are under the care of the Chesmore Funeral Home of Hopkinton. In lieu of flowers, donations may be made to the Alzheimer’s Association of Massachusetts, 309 Waverly Oaks Road, Waltham, MA 02452 or alz.org.