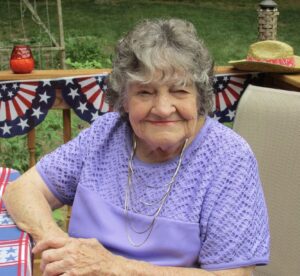 Kathaleen “Bette” (Burr) Oehley, 97, died Aug. 9 at Beaumont Rehabilitation and Skilled Nursing Center in Westborough. She was the wife of the late Donald Oehley, to whom she was married for 47 years. She was the daughter of the late Frank Burr and Kathleen (Frizzell) Burr.

Born at just 3 pounds on the family farm in Southborough, Bette was not expected to survive. Bette grew up on dairy farms and was the first female milk delivery person for Sunshine Dairy, via horse and wagon.

She had a love of animals and a passion for horses. Her horse’s name was Tippy, a little white cow pony with an attitude. She rode Tippy to round up cows, to school and on dates (you had to ride a horse to get a date with Bette). She loved gardening, flowers and fresh corn on the cob.

Throughout her life Bette lived in Southborough, Westborough and Natick, where she met and married the love of her life, Donald V. Oehley, on June 7, 1947. They built a house and raised their five children at 11 Pike Street in Hopkinton. Affiliated with St. Paul’s Episcopal Church in Hopkinton, Bette was a pie maker, sang in the choir and made flower arrangements for the altars from her personal gardens. Bette and Donald were married for 47 years, Donald passed on Aug. 31, 1994. Bette’s later years were spent living in Linwood, spending time with her family.

She is survived by three of her children, son Kendall Oehley and wife Dina of Uxbridge, daughter Linda Gray and husband Jim Morill of Greenfield, New Hampshire, and son Scott and wife Cori Oehley of Upton. She also is survived by eight grandchildren and 12 great-grandchildren.

In addition to her husband, she is predeceased by sons Rodney and Jeffrey Oehley and her siblings, older brother Clifford (Kippy) Burr, older sister Blanche Johnson and younger brother Ernest (Ernie) Burr.

A Eucharistic service will be held Tuesday, Aug. 16, at 10 a.m. at St. Paul’s Episcopal Church in Hopkinton, followed by burial of cremains at Rural Cemetery in Southborough. Services are under the care of Callanan Cronin Funeral Home.