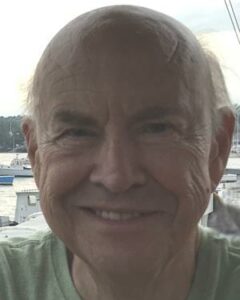 Kerwin Frank Stingley, 77, of Hopkinton died Dec. 27 after a brief period of declining health. Born in Watertown, he was the son of the late Harry and Gladys (Boehne) Stingley.

Raised in Medway, Kerwin worked for many years at Draper Corp. in Hopedale and Dennison Mfg. Co. in Framingham. He then worked at his own business in sales for 30 years until he retired. He and Judi spent their retirement traveling around this country and the United Kingdom, visiting over 25 states as well as England, Scotland and Ireland. He loved taking long road trips and exploring new places. At home he took up bicycling after retirement and sometimes rode 50 miles on a trip. He was the ultimate handyman and loved working around the house. Most of all he enjoyed spending time with his children, grandchildren and close friends.

A funeral service was held Dec. 30 in the Chapel of the Matarese Funeral Home in Ashland (mataresefuneral.com), followed by burial in Evergreen Cemetery in Hopkinton. In lieu of flowers, donations can be made to either the Hopkinton Music Association, P.O. Box 242, Hopkinton, MA 01748 or the Auburn Rockets Booster Club, 99 Auburn St., Auburn, MA 01501.