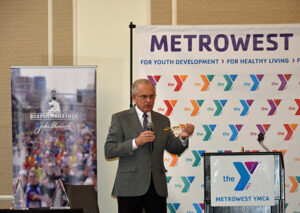 Tim Kilduff had been living in Hopkinton for several years when he attended a meeting of the first Boston Marathon committee ever formed in the town in 1979. Preparations were being made for the 1980 race, which became infamous for Rosie Ruiz, the fraudster who had her victory stripped when it was discovered that she did not run the entire course.

Someone needed to chair the Hopkinton committee, and Kilduff recalled Tom Brown (of the legendary Brown family) pointing in his direction.

“Let the new guy do it,” Kilduff remembered Brown saying.

And so began four-plus decades of involvement with the Boston Marathon, including a brief stint as race director in the mid-1980s. Kilduff now provides analysis for WBZ-TV from the back of a truck in front of the lead men’s runners.

Kilduff also founded and leads the Hopkinton-based 26.2 Foundation, and serves as executive director for the Hopkinton Chamber of Commerce.

His accomplishments in the Hopkinton community gained the attention of Kent State, where he graduated in 1968, and the school recently announced that he would be inducted into the College of Education, Health and Human Services’ Hall of Fame.

“I was taken aback, I asked them, ‘Look, you sure you got the right guy?’ ” Kilduff said upon being told he had earned the Centennial Alumni Award.

“The recognition for whatever little I have done in the communities where I have lived is not necessary, but I have to admit, it felt good,” he added.

Kilduff said the honor allowed him to stop and reflect on his time both in Hopkinton and at Kent State. A Connecticut native, Kilduff joined Kent State’s track and field team as a hurdler. He attended the 20,000-student university during a particularly active time, as opposition to the Vietnam War swelled during the 1960s.

Two years after he graduated, four students were killed and nine others injured by shots fired by National Guard troops during a peace rally. The incident became the subject of Neil Young’s song “Ohio.” One of the students injured, Kilduff said, was someone he had met the prior year.

“I was there during this very turbulent period in the history of the college,” Kilduff said. “It gave me a different view of the world.”

He also was there for performances by the likes of Louis Armstrong and Johnny Carson, who Kilduff met as part of Kent State’s major events committee. Kilduff ran track and still is active in Phi Gamma Delta, a fraternity where he met friends he keeps in touch with to this day.

But in Hopkinton, Kilduff has become associated first and foremost with the Boston Marathon. He said he never imagined that first committee meeting would change his life in the way it ultimately did.

“I had a sense of the draw and the power and the influence of the marathon, but it has far exceeded any sense of that,” Kilduff said. “Whether you’ve run it or you’re a volunteer or your parents dragged you to the starting line, anybody who has been exposed to the marathon has this sense they own a little piece of it.”

Kilduff remembers walking to the start line in 1981 and presenting two-time Boston champion John Kelley with a portrait to commemorate Kelley’s 50th running of the iconic race. In 2014, Kilduff was broadcasting on the lead truck when Meb Keflezighi became the first American man in decades to win Boston, a year after the 2013 finish line bombings.

“When you sit on the truck, you’re supposed to be an impartial reporter, but after we crossed the halfway point we went from reporters to fans,” Kilduff said. “It got more emotional the closer he got to the finish line.”

Kilduff has worked on numerous marathon-related projects, including a current one to build an International Marathon Center in town. He said he has spent much of his time listening and has been fortunate to work with many “capable, caring and giving people.”

The honor from his alma mater has given him the chance to reflect on his involvement at the school and in the community where he has lived for nearly half a century.

“You play it all over in our mind, what would I have done differently?” he said. “Probably not much.”