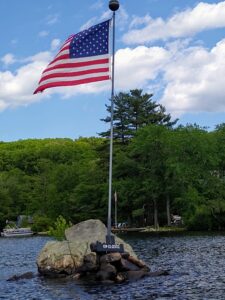 Most people can remember where they were on Sept. 11, 2001. The events of that day moved many people to create makeshift memorials. Soon it seemed like every car and suit lapel was adorned with an American flag. Americans became united in their grief and in their country.

It’s been almost 20 years since that terrible day, and it is harder to find an American flag on a car or a person today. The patriotism and American pride that was inspired by those attacks may seem long gone, but one man’s memorial to that day still stands proud on Lake Maspenock.

Steve Snow is the fifth generation of the Snow family to own his spot on Lake Maspenock. He and his wife, Christine, have raised their three children in the log cabin they built 20 years ago.

Shortly after the terrorist attacks of Sept. 11, Snow was sitting on his dock, sipping a beer and pondering the events that happened on that terrible day. He glanced up and looked over at the pile of rocks that sit off of Piney Island. He grabbed some leftover pipe and a round float from a cooling tower he had on hand from a job he just finished and created his makeshift flagpole. He rowed out to the rock pile and raised the American flag that has stood ever since.

In the years that the flag has stood, it has become a favorite landmark to lake residents and visitors alike who are drawn to the scene by the flag as well as the wildlife that hangs out on the rocks underneath it. Swans, ducks, geese and great blue herons all have been extras for “Flag Rock” photographers. A few lucky ones get a shot of prized bald eagles.

Snow estimates he has gone through three or four poles and around 60 flags in the 20 years since it first went up. The site has been maintained over the years with flags donated by the Hopkinton Masonic Lodge, the Lake Maspenock Preservation Association and others who hope to keep Flag Rock a living memorial to those lost on Sept. 11, 2001.